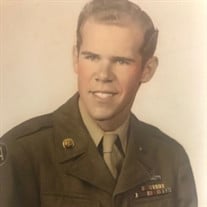 Bernard McKendree “Ace” Parker passed away on January 16, 2019 surrounded by his loving family. The son of Thomas and Jewel Roberts Parker, Ace was born in Rocky Ford, Georgia on January 17, 1925. He grew up in Macon, was a member of Cherokee Heights United Methodist Church, and as a Lanier High School student participated in the ROTC program. Drafted into the U.S Army at the end of his Junior year, he was assigned to the 94th Infantry, 3rd Army under General George Patton. PFC Parker was severely wounded in Germany, and after recovery returned to Macon. He was awarded the Combat Infantryman’s Badge, Purple Heart, European African Middle East Service Medal with two battle stars, the Good Conduct Medal, American Service Medal, and the World War II Victory Medal. He graduated from Mercer University in 1950 where he was a proud member of the Kappa Alpha Order. During his adult Macon years, his career was with the Federal Housing Administration as a real estate appraiser. He was an active member of Shurlington United Methodist Church, the Macon Jaycees, and the Elks Club. He proudly served as a City Alderman and impacted the lives of many youth in the Vine-Ingle Little League and as the president “Fearless Leader” of the Shurlington Little League. Moving to Lake Sinclair in 1986, he was an active member of the choir, the United Methodist Men and the Men’s Bible Class at Milledgeville’s First United Methodist Church. Elected as a Baldwin County Commissioner in 1996, he served as chairman from 2001-2005. He was a member of the Rotary Club from 1990 until 2014 and was recognized as a Paul Harris Fellow and a Will Watt Fellow during his tenure. He worked as the staff appraiser for Century Bank and Trust from 1985 and reluctantly retired at age 86 in 2011. Ace was greatly honored to serve as a director of the Georgia College and State University Foundation and received the GCSU Honorary Alumnus Award in 2010. In 2017, he was awarded France’s highest honor by President Macron and made a Knight in the Order of the Legion of Honor in recognition of his valorous service in the liberation of France. Ace was very proud to be accompanied by thirty of his family members for the presentation ceremony at the Georgia State Capitol. The family would like to thank Harmony Hospice for their compassion and attention given during Ace’s illness. He is survived by his beloved wife of fifty-two years, Cecile Hattaway Parker, daughters Kathy Parker Barnes (Paul), Nancy Parker Marshall (Jim), sons Ken Parker (Lisa), Kerry Glover (Melissa), and Randy Glover, nine grandchildren, and nine great grandchildren, and numerous nieces and nephews that he loved as his own. He was predeceased by his brother Thomas Parker, Jr.(Roberta), and is survived by his brother Augustus M. Parker (Dee). Visitation is Tuesday, January 22, at noon at First United Methodist Church, Milledgeville, followed by the service at 1:00. Interment will be at Georgia Veterans Memorial Cemetery, Milledgeville. Memorial gifts may be given to First United Methodist Church, 366 Log Cabin Road NE, Milledgeville 31061.

Bernard McKendree &#8220;Ace&#8221; Parker passed away on January 16, 2019 surrounded by his loving family. The son of Thomas and Jewel Roberts Parker, Ace was born in Rocky Ford, Georgia on January 17, 1925. He grew up in Macon, was a member... View Obituary & Service Information

The family of Ace Parker created this Life Tributes page to make it easy to share your memories.