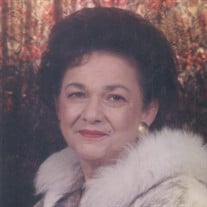 Aida Maria Martinez Triana, age 90, of Milledgeville, passed away June 1, 2020. Graveside Services for Aida Martinez Triana will be conducted privately for the family on Saturday, June 6, 2020 at 11:00am in Heritage Memorial Park. Aida was born June 3, 1929, in Las Villas, Cuba, to the late Roberto Carlos and Elvira Triana. Along with her parents, she was also preceded in death by her siblings, Marta Martinez, Berta Martinez, and Dr. Carlos Triana. She married Dr. Alberto Martinez in 1952, and they moved to the U.S. for her husband to complete his medical training. They were happily married for 51 years, until his death in 2003. She attended the University of Havana, where she obtained her teaching certificate, and taught primary school prior to moving to the U.S.. She then attended Baylor University and GSCW (now GCSU), where she also worked in the language department. She earned a Masters Degree in Mathematics. She also taught ballet for many years. Aida has been a member of Sacred Heart Catholic Church since moving to Milledgeville in 1956. She is survived by: 4 children, Al Martinez, Jr. (& Jeanine) of Milledgeville, Dr. Sandy Martinez (& Rosemary) of Memphis, Dr. George Martinez of Milledgeville, and “Linda” Aida Marie Martinez of Macon ; 7 grandchildren, Mary Beth Martinez Dunning (& Jaren) of New York City, Nikki Martinez, DNP of Memphis, Carmen Martinez of Memphis, Rosa Martinez of Memphis, Aquilino “Kiko” Martinez of Memphis, Parker Pierce of Macon, and Carson Pierce of Macon ; and several closes nieces and nephews, as well as grand-nieces and grand-nephews. The family would like to acknowledge and thank Esther Brooks and Bernice James for the wonderful care they gave her over the years. The family has expressed that those who would like to make Memorial Contributions, may do so to: St. Jude’s Childrens Research Hospital, Att: Memorial Giving, 501 St. Jude Place, Memphis, TN 38105 ; or online at: stjude.org Condolences may be expressed online at: www.williamsfuneral.net Williams Funeral Home and Crematory of Milledgeville is in charge of arrangements.

Aida Maria Martinez Triana, age 90, of Milledgeville, passed away June 1, 2020. Graveside Services for Aida Martinez Triana will be conducted privately for the family on Saturday, June 6, 2020 at 11:00am in Heritage Memorial Park. Aida was... View Obituary & Service Information

The family of Aida Martinez Triana created this Life Tributes page to make it easy to share your memories.