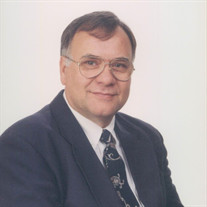 Alan Ronald Jilks, age 73, passed away last Monday at his residence. Funeral services will be at Bradenton Seventh-Day Adventist Church, Saturday, February 23rd at 5:00pm. Alan was born in St. Albans, England to Louisa and Stephen Jilks. He is survived by his 3 brothers, Michael Jilks, Colin Jilks (Christine) and Stephen “Steve” Jilks (Jackie); his two sons Mark Jilks, Matthew Jilks (Johnnetta) and daughter Alane Waddell (Edwin); 8 granddaughters Kim, Christal, Jessika, Priscilla, Cassandra, Amber and Payton; 18 great-grandchildren and lifelong friend Linda Haines. Alan grew up in South London in the UK. At the age of 7 he joined the choir at St. James Church where his love for music began; he became head Choirboy by age 14. He was a boy scout and earned his Queen’s Scout (which is equivalent to Eagle Scout in America). He apprenticed as an engineering draftsman until the age of 21. He moved to America in 1966, living in NC, Georgia and finally settling in Bradenton, Florida where he lived the rest of his life. Alan worked as painter, wallpaper hanger, and developed other craftsman skills - always being a perfectionist in all areas. He was an active member of the Bradenton Seventh-Day Adventist church holding many positions that included youth leader for 20 years, Head Deacon, General Maintenance, Finance Chair, Building Chairman, Sabbath School teacher, oversaw the purchase and/or rebuilding of 18 churches in Moldova. The legacy of Alan’s hard work, dedication to his church and family will always be remembered by those whose lives he touched. He loved his church and family very much and was always offering support. In lieu of flowers, donations may be made to: Bradenton Seventh-Day Adventist Church 2106 17th Ave W Bradenton Florida 34205 To purchase new hymnals and continue his love for music.

The family of Alan Jilks created this Life Tributes page to make it easy to share your memories.