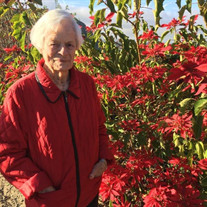 A Memorial Service will be held on Saturday, April 24, 2021, at El Nazareno Presbyterian Church, 3368 N. Whitney Ave, Hapeville, GA, at 2:00 pm. The Service will be outside on the lawn, but the family requests that masks and social distancing will be observed. Reception to follow. Mrs. Annie Laura Kelly, age 94, passed away Thursday, March 4, 2021, at Harbor Grace Hospice in Atlanta, Ga. A committal service will be held on Thursday, March 11, 21011, at West View Cemetery in Milledgeville, Georgia, at 11:00 am. Mrs. Kelly was born in Washington County on April 6, 1926, the second of four daughters born to Fred Jackson Pattishall and Emma Pittman Pattishall. After graduating from Tennille High School, she relocated to Macon, Ga where she worked for the phone company while attending nursing school. While in Macon, Mrs. Kelly met and married her first husband, Francis Henry Mills, who was from Barnesville, Ga. They relocated to the Atlanta-area where she spend the remainder of her life. They were married over 30 years at the time of Mr. Mills’ death. She later married John Mikel Kelly and they were married for 30 years at the time of Mr. Kelly’s death. Mrs. Kelly is pre-deceased by her parents; both of her husbands; and her sisters: Muriel P. Bryan (William G.), Frances Wheatley, and Jean Pattishall. She is survived by her nieces: Patricia L. Bryan (Kerry Cook), Pattis R. Thompson (Mark), Dianne W. Jones (Mark), Emily Bryan-Swindell; her nephews: William F. Wheatley (Vivian), Robert B. Robinson, III (Trudy), Richard S. Wheatley (Carolyn), William J. Bryan (Jenny), Michael P. Robinson, David P. Bryan, Jerome M. Bryan (Laura); many great-nieces and nephews; and several great-great-nieces and nephews; her step-children: Karon Kelly Pinion (Richard), Nancy Kelly Russell (William), Gary Kelly (Beth), Daryl Eugene Kelly (Michelle), Carol Kelly Johnson (Michael), 10 grandchildren and 16 great grandchildren. There are many examples in the Bible of devout women who worked diligently to do God’s work. Annie Laura Kelly was one of those. She attended Hapeville Presbyterian Church for over 40 years. During which time she held almost every job a lay person can do in the local church. She was one of the earliest women to be ordained as an Elder in her church and served on the church session, frequently as Clerk of Session, chaired every committee, was superintendent of Vacation Bible School, a youth advisor and Sunday school teacher. She served as moderator of Presbyterian Women in her local church and at the Presbytery level. During the Hapeville church’s centennial year, she headed the Centennial Committee. In 1984, Annie Laura’s influence spread beyond the church and into the community when she served as the chairperson of a committee formed to help church members who might have special needs. Through her efforts the Hapeville Outreach Center was established to serve the needy people in Hapeville and the surrounding communities. The Center was also the distribution point for Meals-on-Wheels, which she coordinated with her husband, John Kelly, filling in for volunteers who were unable to make their deliveries. She was recognized for her outstanding civic and community involvement by the Hapeville Exchange Club naming her 1984 Woman of the Year. In 1986 she was selected as Mrs. South Fulton by the East Point American Legion. She also served as the president of the Hapeville Service League. Not only involved with her local church, Annie Laura also served on the Presbytery level fulfilling numerous positions. In 1986 she served as the Moderator of Atlanta Presbytery. She also served as President of the Atlanta Presbytery Presbyterian Women (1985), Commissioner to the General Assembly of the Presbyterian Church US (1988) and Commissioner to the meeting of the Synod of the South Atlantic (1993). She was honored as Greater Atlanta Presbytery’s Outstanding Senior Presbyterian and in 2000 she was named Greater Atlanta Presbytery’s Outstanding Small Church Lay Person of the Year. In 1999 Annie Laura and her husband, John, participated in a Presbytery sponsored program trip to Haiti, where they assisted in pre-school vision screenings. The Kelly’s opened their home to a teenaged boy from El Salvador, who was brought to Atlanta by the Children’s Cross Connection for much needed reconstruction surgery. He remained with them until he was well enough to return home. She opened her home to a homeless mother with three children, helped the mother find work and often drove the children to school. She also worked with other churches in Atlanta in the Refugee Resettlement Program helping renovate and furnish two houses in the Druid Hills area for use by refugees who were coming to the Atlanta area. Annie Laura was employed by Rich’s Department Store for over 30 years. She was the first woman to be named Director of Merchandising Information. In 1970, she spend several weeks in Ann Arbor, Michigan, collaborating with the staff of the School of Business at the University of Michigan on a text book for the retail marketing program. She is credited in the bibliography of the text book. Annie Laura served her local community and communities far beyond. She was a loving aunt, a giving and caring friend, a mentor to many women during their struggle to attain equality in the work place. She helped break some glass ceilings and was always proud of the accomplishments of others. She gave of her time, talents, energy and resources to do God’s work. Jesus commanded his followers to be living examples of His love. He washed the feet of his disciples to show the servant attitude he expected his followers to manifest. The life of Annie Laura Kelly was the exemplification of these Christ-like traits for all to see. In lieu of flowers, the family requests that a donation be made to your favorite charity in Mrs. Kelly’s name.

A Memorial Service will be held on Saturday, April 24, 2021, at El Nazareno Presbyterian Church, 3368 N. Whitney Ave, Hapeville, GA, at 2:00 pm. The Service will be outside on the lawn, but the family requests that masks and social distancing... View Obituary & Service Information

The family of Annie Laura Kelly created this Life Tributes page to make it easy to share your memories.