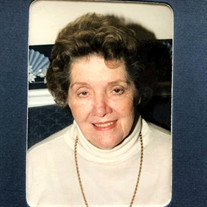 Arlene Eva Butterfield McLaren, age 95, passed away on Monday, August 12, 2019. Arlene was born in Olathe, Colorado on November 19, 1923 to Rolla and Edith Butterfield. She was preceded in death by her beloved husband, Ralph Lee McLaren, and grandsons, Gerry Lewis and Lee McLaren, Jr. She was also preceded by her sister, Fern Rider, and brothers Laverne, Bob, & Bill Butterfield as well as her parents. She is survived by her children: Lee McLaren (Betty) of Charlotte, NC; Harold McLaren (Jo Ann) of Fort Mill, SC; Sharon Lewis (Gerald) of Hazlehurst, Ga.; Gary McLaren (Cathy) of Midlothian, VA.; Rev. Beverly McLaren of Milledgeville, Ga. She is also survived by 10 grandchildren: David McLaren, Kimberly McLaren, Donald McLaren, Steven McLaren, Brandon McLaren, Charles Lewis, Matthew McLaren, Lennox McLaren, Marie Branch, & Caitlin Figura, as well as 9 great-grandchildren. On September 27, 1942, she married her high school sweetheart, Ralph Lee McLaren and together they raised 5 children. In 1959, they moved to Milledgeville, Georgia and away from her beloved Colorado. All who knew her witnessed the continued longing for those Rocky Mountains. Family and faith were the foundation for Arlene. Her greatest joy in life was being a wife and a “Mother like no other” to her 5 children. They remember her strength, patience, guidance and support as they navigated the challenges of life. Arlene loved the Lord wholeheartedly as witnessed by the many people who heard her hum and sing “Every Day With Jesus” until the very end. She influenced her grandchildren through her faith and the many children through the years in her Primary class at the Milledgeville Church of God. She and “Brother Mac” were favorites and are remembered fondly by many people. She was an accomplished seamstress and a champion at Chinese Checkers. She loved to play the piano and sing. Arlene had a fascination with words and rhyming and never lost her sense of humor. The family would like to thank the staff of Fellowship Home at Meriwether for their compassionate care during her last few years. Funeral services will be conducted Friday, August 16, 2019 at 1:00 pm in Williams Funeral Home Chapel in Milledgeville with Rev. Tyrone Hutchinson and Rev. Eddie Wiggins officiating. Interment will follow in Baldwin Memorial Gardens. The family will receive friends at Williams Funeral Home on Thursday, August 15, 2019 from 6:00 until 8:00 PM. She was a member of New Hope Worship Center in Milledgeville. Flowers accepted or contributions may be made to New Hope Worship Center, P.O. Box 786, Milledgeville, Ga. 31059. Condolences may be expressed online at: www.williamsfuneral.net Williams Funeral Home and Crematory of Milledgeville is in charge of arrangements.

Arlene Eva Butterfield McLaren, age 95, passed away on Monday, August 12, 2019. Arlene was born in Olathe, Colorado on November 19, 1923 to Rolla and Edith Butterfield. She was preceded in death by her beloved husband, Ralph Lee McLaren, and... View Obituary & Service Information

The family of Arlene McLaren created this Life Tributes page to make it easy to share your memories.