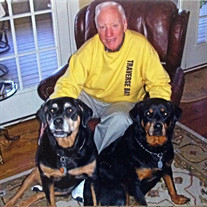 Arley Joseph Mead, age 85, of Eatonton, passed away January 24, 2021. Born on December 26, 1935, Arley was born and raised in Cheektowaga, New York and graduated from Canisius High School in 1953. He attended Canisius College until 1956, and later transferred to Georgetown University, where he graduated from the Edmund A. Walsh School of Foreign Service in 1958. He was a member of Delta Phi Epsilon and Alpha Phi Omega Fraternities, as well as Scabbard and Blade military honor society. Arley spent time as a lieutenant in the army before moving on to a career in sales in Northern Virginia where he raised his family. He went on to have a long career in the pharmaceutical and federal research industry, working for Pfizer, Litton, Bionetics, and Hazleton Labs for over 25 years. In the 90s, he acquired Harford Systems, which he owned and operated, while residing in Baltimore until his retirement. Soon afterward, Arley and his wife, Margie, moved to Greensboro, Georgia to be closer to family. He was a loving and generous father, an avid reader, a dog lover, and an enormous sports fan, rooting for the Buffalo Bills and the Washington Redskins for much of his life. He embraced the southern lifestyle and enjoyed life to the fullest. He was the nicest man you would ever meet, and many people would say he was the smartest man they knew. He treated everyone with respect and as an equal no matter who they were or where they came from. He will be greatly missed by all that knew him. He is survived by his wife, Margie Mead; four sons and two daughters; Daniel Mead (Paula), Timothy Mead (Karen), William Mead (Marlene) and Andy Howe (Kathy) and Mary Prendergast (Mike) and Joanna Howe; nine grandchildren, Lindsay (Blake), Rachel, Nathan, Ryan, Billy, Kelly, Carley, Kelly Howe and Jessica (Jacob); and two great-grandchildren, Barrett and Brody. He was predeceased by his parents, Daniel and Nora Mead, and grandson Justin Mead. A Mass will be celebrated at 10 AM on Thursday, January 28, 2021 in Christ Our King and Savior Catholic Church at Lake Oconee with Father Young Celebrating. The Church will require a Mask. A reception will be held following the service at the family's residence. He will be laid to rest at Georgia Veterans Memorial Cemetery in Milledgeville, Georgia, where a private service will be held. In lieu of flowers, donations can be made in his name to the Taylor Foundation with a note specifying the Justins Place, 4800 Cliff Sullivan Rd., Reisterstown, Md. 21136.

The family of Arley Mead created this Life Tributes page to make it easy to share your memories.