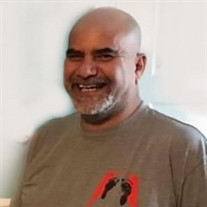 Eladio Armando “Pancho” and “Junior” Castillo, age 61, of Milledgeville, passed away Friday, February 5, 2021. Funeral services for Armando Castillo will be conducted Monday, February 8, 2021 at 3:00pm in the Chapel of Williams Funeral Home of Milledgeville. Interment will follow in Baldwin Memorial Gardens. The family will receive friends at Williams Funeral Home on Sunday, February 7, 2021 from 2:00pm until 5:00pm, and on Monday, February 8, 2021 from 2:00pm until the service hour. A native of Havana, Cuba, Armando was born on January 28, 1960 to the late Armando Castillo and to Mrs. Ana Lara Castillo. In addition to his father, Armando was also preceded in death by two grandchildren, Ruby Reid and Jack Reid, and by grandparents, Cesar and Carolina Lara. Armando had lived in Milledgeville since 1972. He was a member of New Hope Christian Fellowship in McIntyre, and was the Owner / Operator of Capitol Transmission Services, Inc., in Milledgeville. Armando is survived by: his wife, Lisa Dillard Castillo ; his Children, Ryan Castillo, Kendall (& Andy) Reid, and Landon Castillo ; his sisters, Gina (& Matt) Dixon, Anne (& Dell) Mason, and Emily (& Scott) Schroeder ; his Mother, Ana Lara Castillo ; and a number of nieces and nephews. Condolences may be expressed online at: www.williamsfuneral.net In lieu of flowers the family request donations towards purchasing a Cuddle Cot system to aid and support other families who may also one day give birth to a sleeping baby. Donations to https://www.flipcause.com/secure/fundraiser/NDg4NjQ=/33415 Williams Funeral Home and Crematory of Milledgeville is in charge of arrangements.

The family of Armando Castillo created this Life Tributes page to make it easy to share your memories.