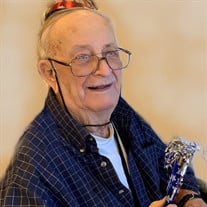 Arnold Matland Harris, age 90, of Milledgeville, passed away Sunday, September 6, 2020. Funeral Services for Arnold Harris will be conducted Thursday, September 10, 2020 at 1:00 PM in the Chapel of Williams Funeral Home and Crematory of Milledgeville with Rev. Larry Glover officiating. Interment will be in the Georgia Veterans Memorial Cemetery. The family will receive friends at the Williams Funeral Home on Thursday, September 10, 2020 from 12:00 PM until the service hour. Mr. Harris was born in Cleio, Michigan, grew up in Wilkinson County, and had made his home in Milledgeville since 1952. He was the son of the late Fred C. Harris, Sr. and the late Virginia Bell Harris. Along with his parents, he was also preceded in death by his; sisters, Lorraine Brantley and Grace Raleigh, and by his brother, Fred "Sonny” Harris. Arnold is survived by his wife of 68 years, Betty Sanders Harris ; sons, Donald B. Harris (Pam) of West Virginia and Tracy K. Harris (Teriann) of Shellman Bluff; his sister, Iva (James) Green of Lake Sinclair ; his brother, Gerald Ayliffe of California ; his special caregiver, Stacy Warren; a number of nieces and nephews also survive. In lieu of flowers, the family has requested that Memorial Contributions be made to: The Bethel Cemetery Care Fund, c/o Williams Funeral Home, 1670 North Jefferson Street, Milledgeville, GA 31061

The family of Arnold M. Harris created this Life Tributes page to make it easy to share your memories.