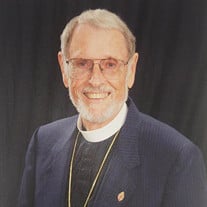 The Reverend Bonnie Carl Buice, Jr. went home to reunite with family and friends on September 3, 2021. He was born in East Point, Georgia, the son of the late Bonnie Carl Buice, Sr. and the late Elizabeth Ramsey Buice. Carl was a U. S. Army veteran where he served at Fort Bragg, NC. He graduated from Mercer University and Mercer Law School. His first career was in the legal profession before he received a call to enter into the ministry. He was very open minded to various faiths and religions and studied for the Episcopal priesthood at Notre Dame, the noted Catholic university. He served as Associate Minister of Holy Trinity Episcopal Church in Decatur, GA and as the Rector of St. Francis Episcopal Church in Macon, GA. Carl re-entered the practice of law, serving in the firm of Waddell, Emerson, George, and Buice and became a bi-vocational minister, serving part-time as Rector of St. James Episcopal Church in Macon GA. He felt that both the law and the ministry involved supporting people through difficult and painful times and helping them to heal from broken relationships and traumatic experiences. After retiring from the ministry, Carl served as Chair of the Baldwin County Democratic Party as his vehicle for helping people find common ground and to work together for the common good through participatory democracy. In his ministry, legal, and political work, he was informed by the Scripture, “what you do for the least of these you do also unto me.” Carl and Hulane lived life to the fullest, enjoying visiting with family and friends and travelling world-wide to far flung locales in Western Europe, behind the Iron Curtain to then-East Germany and then-Czechoslovakia, and the Middle East, where they were unwilling spectators/participants in the “Arab Spring” revolution in Egypt at the Cairo International Airport in 2011 (they made it out safe!). Carl was preceded in death by his son, William Daniel Buice. He is survived by his wife, the Honorable Hulane George, his brother the Reverend Bill Buice of Pensacola, FL, his children, Dr. Merrianne Dyer (Larry) of Gainesville, GA, Shannon Warwick of Victoria, BC, the Reverend Samuel Walton Buice (Margaret) of Clarkesville, GA, the Reverend Christopher Carl Buice (Suzanne) and his stepchildren, Dr. Bryan George (Nikki) of Ashburn, VA, Lt. Col. (US Army Retired) Kyle George (Danyelle) of Macon, GA, Erin George Fulcher (Garry) of Waynesboro, GA and his 15 grandchildren and 8 great grandchildren. Visitation will be held on Friday, September 10, 2021 at 4:00 p.m. at Williams Funeral Home in Milledgeville, GA with services to be held on Saturday, September 11, 2021 at 3:00 p.m.at St. Stephen’s Episcopal Church, Milledgeville, GA. The service will be live-streamed at St. Stephen’s Episcopal Church website www.ststephensga.org. In lieu of flowers, contributions may be made in memory of Carl to St. Stephen’s Episcopal Church, P. O. Box 309, Milledgeville, GA 31059 or to the Chard Wray Food Pantry, care of St. Stephen’s Episcopal Church. For those planning to attend the service, at the request of the church, please wear a mask and practice social distancing.

The Reverend Bonnie Carl Buice, Jr. went home to reunite with family and friends on September 3, 2021. He was born in East Point, Georgia, the son of the late Bonnie Carl Buice, Sr. and the late Elizabeth Ramsey Buice. Carl was a U. S. Army... View Obituary & Service Information

The family of The Rev. B. Carl Buice Jr. created this Life Tributes page to make it easy to share your memories.