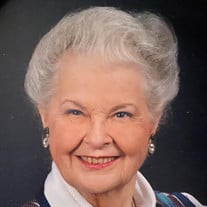 Betty Allen Jackson Hodges was born on May 3, 1926, to Lawrence Leroy Jackson and Annie Lou Quick Jackson in Birmingham, Alabama. Once Betty graduated from high school, she attended Auburn University at 17 years old, majoring in chemistry, then entered the University of Alabama. Growing up she had a crush on Judson Bennett Hodges and married him in 1946. They had three sons, Jay, Sid, and Paul. While raising her sons, she was active in the Methodist church and was also known for her wonderful homemaking and cooking skills. This led her to be recognized as Gwinnett County Homemaker of the year. She had fine tuned this role preparing delicious meals for her family, taking the meal as they traveled to the other side of Atlanta to the church Judd was serving. Plus being a tall woman, she made her own clothes. Thankfully she was an excellent seamstress. In 1957 Judd answered his call to the ministry and began his journey towards ordination, while also continuing to work for Delta Airlines. Betty studied along with Judd which lead not only to her having a very active role as the pastor’s wife, but also a beloved Sunday School teacher and Disciple Bible Study leader. She was elected to be a delegate to General and Jurisdictional Conferences of the United Methodist Church twice and was a keynote speaker for many United Methodist Women’s retreats. Following in her mother’s footsteps, Betty frequently taught at or was the keynote speaker for Schools of Mission. She served as an inspiration to all who had the privilege of knowing her. As a young girl, Betty learned how to play the accordion. These lessons played a key role in Judd’s Sunrise Easter services with her leading the congregation in hymns as she played the tune on her accordion. She and Judd also enjoyed featuring their three sons harmonizing with them for the anthem during church services. After Judd passed away, she lived close to Jay and became involved in the churches he served. Here in Milledgeville, she met Sam Watson who became her constant companion. They supported one another, sharing countless stories throughout their relationship. Betty also helped nurture her eight grandchildren and 13 great grandchildren, entertaining them with her story telling and bountiful wisdom. She is survived by her three sons, Jay (Linda) of Milledgeville, GA, Sid (Carol) of San Antonio, TX, and Paul (Jean) of Greenville, SC. In lieu of flowers, memorial gifts may be sent to: First United Methodist Women of Milledgeville, 366 Log Cabin Road, Milledgeville, GA 31061 John Hodges Memorial Scholarship, Beaumont Public Schools Foundation 3395 Harrison Ave, Beaumont, TX 77706 OCD Gamechangers, 4063 Indian Town Road, Marietta, GA 30066, www.ocdgamechangers.com American Heart Association, PO Box 840692 Dallas, TX 75284-0692 Due to Covid-19, We are asking family and close friends to please wear a mask and observe social distancing. Services will be live streamed on https://www.youtube.com/watch?v=KE9bxtubEzg on our Funeral Home facebook page( Williams Funeral Homes) and also available archived on our website after the service has concluded.

The family of Betty Hodges created this Life Tributes page to make it easy to share your memories.