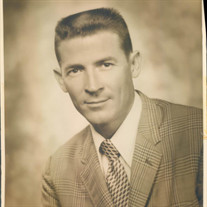 Billy Miller, age 85, of Milledgeville, passed away Thursday, January 14, 2021, surrounded by his family .Graveside services will be conducted Tuesday, January 19, 2021 at 2:00pm at Heritage Memorial Park with Rev Bill Taylor officiating. Billy, along with his twin brother, Bobby, were born on May 31, 1935 in Milledgeville, to the late Benjamin F. Miller and the late Lillian Miller Miller. Along with his parents, he was also preceded in death by his brothers, Bobby Miller, Robby Miller, and Roland Miller The twins attended Midway High School, and then both attended Forestry School. They later formed Miller Brothers Construction Company, developing land and building throughout Baldwin County. After many years of their partnership, Billy accepted a position as County Engineer for Baldwin County, supervising Maintenance and Sanitation. He retired after ten years, then accepting a newly formed program with the Department of Corrections, supervising one of the very first Inmate Construction Programs. Retiring from the Department of Corrections in 1997, he always wanted to work more. Billy was an avid hunter, loved outdoors, his garden, and going on trips with his family in his motor home. Billy was a founding member and builder of John Milledge Academy. He was a member of the Army National Guard for ten years, and received his Honorable Discharge in 1961. He is survived by: his wife, Betty Miller of Milledgeville ; his daughters, Suzanne Morgan (& Greg) of Milledgeville, Cheree Hariston (& Rodney) of Milledgeville, and Daphne Miller of Milledgeville ; his son, Gary Miller of Sparta ; and his sister, Linda Pittman of Milledgeville. Condolences may be expressed online at: www.williamsfuneral.net Williams Funeral Home and Crematory of Milledgeville is in charge of arrangements.

The family of Billy Miller created this Life Tributes page to make it easy to share your memories.