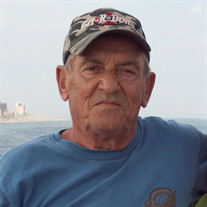 As Robert Chiplock would have said about one of the many fish he caught, he “had the course,” passing away peacefully on Sunday, November 8, 2020 at the age of 82, at his home in Ivey, Georgia, surrounded by his family. A Funeral Mass will be Celebrated on Wednesday, November 11 at 2PM in the Williams Funeral Chapel in Milledgeville. The family will receive friends at the Funeral Home from 1PM until 2PM. A dedicated husband of 58 years, Bob adored his wife Patricia. He was a hero to his children, running into their burning home to rescue them after a gas explosion. He was a committed member of the Knights of Columbus, volunteering at the weekly fish fry during Lent and taking pride in selling the most Tootsie Rolls during the annual fundraiser. And he was a dear friend to many, keeping strong relationships even as he moved from Upstate New York to Fort Lauderdale, Florida and to his final home in Ivey, Georgia after retiring from a 23-year career in customer service at United Airlines. Never shy, Bob got as much out of his 82 years as anyone. Born in Watervliet, New York, Bob was an aspiring musician who performed with his band in between working as many as three jobs to support his family. Even through his health struggles later in life, his face would light up when he walked into a room with a piano and he was sure to put on a show. He beamed with pride listening to his grandchildren play any musical instrument, albeit with a few cringes over mishit notes. Few things brought him more joy than a large family gathering with plenty of food and drink. Bob and Pat always opened their home to family and friends, greeting them with a concoction they called “Good Night Irene.” He was a charmer and a people person, but enjoyed the quiet solitude of fishing. Bob is survived by his wife Patricia; his children Robert, Kevin, Tamara and Megan; and his grandchildren, Riley, Madison, Scarlet, Jake, Trevor and Tianna. Bob will be interred at Georgia Veterans Memorial Cemetery. In lieu of flowers, the family asks you to consider a donation to Serenity Hospice Care.

As Robert Chiplock would have said about one of the many fish he caught, he &#8220;had the course,&#8221; passing away peacefully on Sunday, November 8, 2020 at the age of 82, at his home in Ivey, Georgia, surrounded by his family. A Funeral... View Obituary & Service Information

The family of Bob Chiplock created this Life Tributes page to make it easy to share your memories.

As Robert Chiplock would have said about one of the many fish...