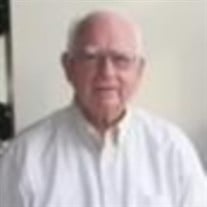 John Edward “Buddy” Martin, 86, passed away on Thursday, September 9, 2021. Funeral services will be held at 11 AM on Monday, September 13, 2021 in the Chapel of Williams Funeral Home with Elder Craig DeLoach officiating. Interment will be at 3:00 PM on Monday, September 13, 2021 in the Mt. Calvary Baptist Church Cemetery in Cary, GA. The family will receive friends on Sunday, September 12,2021 in Williams Funeral Home from 4:00 PM until 6:00 PM. The family requests that all attending please wear masks. Buddy was born in Milledgeville on July 18, 1935. He was the son of the late Willie Edward and Lillie Mae Martin. He was a 1952 graduate of Midway High School, and 1954 graduate of Georgia Military College. He earned his Bachelor’s Degree in Business Administration from the University of Georgia in 1956 where he was a member of the Sigma Nu Fraternity. He was commissioned as a 2nd LT. Buddy served in the Army Reserves for 10 ½ years and retired as Captain of the US Army. Buddy was in the grocery business most of his life. He became a partner with his father in 1959 at Martin’s Store, which was at the time a third-generation business since opening in 1937. Buddy eventually took over the business, enlarged it and it became Martin’s Foodlane and later Martin’s IGA. Buddy was named Small Business Owner of the Year in 1986. Buddy loved his community. He served as a member of the Milledgeville/Baldwin County Recreation Board from 1965-1979. Due to his accomplishments on the board, Mayor James Baugh declared March 10, 1980, as “Buddy Martin Day” in the city of Milledgeville. Buddy served as a city councilman and represented the council on the GMC Board of Trustees. He served on the Board of Trustees at John Milledge Academy. He served as a Director for Century Bank for many years. Buddy was a great man of faith. He was a devoted deacon and charter member of Hardwick Primitive Baptist Church for 77 years. He taught Sunday School many of those years, was a choir member, song leader, and also a lay speaker for the church when he was needed. He served as Chairman of the Southern States Bible Conference for 15 years and Vice Chairman of the Primitive Baptist Foundation. He is survived by his wife of 63 years, Barbara Martin; son, Michael Martin and his wife Tonya; daughter, Suzanne Ratliff and her husband Jeff; grandchildren, Blake Martin, Braeden Martin, Ava Kate Martin and Bailey Ratliff; sister, Betty Jones-Williams and nephew, Ken Jones and his wife Laura. The family has asked that those who wish, make Memorial contributions to The Primitive Baptist Foundation, Inc., P.O. Box 595, Roswell, GA 30077-0595. The family would like to thank Serenity Hospice and all his caregivers. Condolences may be expressed online at: www.williamsfuneral.net Williams Funeral Home and Crematory of Milledgeville is in charge of arrangements.

John Edward &#8220;Buddy&#8221; Martin, 86, passed away on Thursday, September 9, 2021. Funeral services will be held at 11 AM on Monday, September 13, 2021 in the Chapel of Williams Funeral Home with Elder Craig DeLoach officiating. Interment... View Obituary & Service Information

The family of Buddy Martin created this Life Tributes page to make it easy to share your memories.