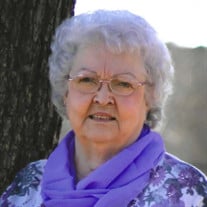 Audrey “Carolyn” Ferguson Smith, age 81, of Milledgeville, passed away Thursday, January 14, 2021. Graveside services for Carolyn Smith will be conducted Sunday, January 17, 2021 at 2:00pm in Baldwin Memorial Gardens. The family will receive friends at the Williams Funeral Home of Milledgeville on Saturday, January 16, 2021 from 5:00pm until 7:00pm. A native and lifelong resident of Baldwin County, Carolyn was born May 4, 1939 to the late Samuel Gordon Ferguson and the late Bertha Logan Gunnell. In addition to her parents, she was preceded in death by her husband, Charles W. Smith, by her Maternal Grandmother, Nellie Mae Ennis Logan, and by her Maternal Grandfather, Asa Solomon Logan, and by a brother, Lee Ferguson. Carolyn was retired from Baldwin County Hospital and from Georgia College. She was committed, dedicated, and loved her Lord, and always lived her life to set a good example. Carolyn loved to grow red roses and crochet. Carolyn always enjoyed being a Sunday School Teacher, Vocalist, and choir member. She had been a longtime member of Mosleyville Baptist Church, and was currently a member of Pathfinders Church. Carolyn is survived by: her sons, Steven C. Young and Robert Michael Young, both of Milledgeville ; a daughter, Tronie Lanelle Young of Pensacola, FL ; a step-daughter, Charlotte Smith McShurley (& Dennis) of Phoenix City, AL ; a grandson, Patrick McShurley ; her sisters, Ora F. Hurst, Connie F. Roberts, and Patricia Miller ; her brothers, W.C. Ferguson, and Fred Ferguson ; and a number of nieces and nephews. Condolences may be expressed online at: www.williamsfuneral.net Williams Funeral Home and Crematory of Milledgeville is in charge of arrangements.

The family of Carolyn Ferguson Smith created this Life Tributes page to make it easy to share your memories.