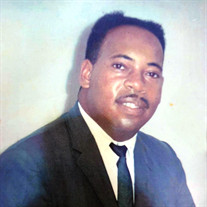 Charlie Washington, age 78, of Milledgeville, passed away Saturday, June 12, 2021. The memorial service for Charlie Washington will be conducted on Saturday, June 26, 2021 at 2:00pm in the Chapel of Williams Funeral Home and Crematory of Milledgeville with Brother Michael Lewis, Sr. officiating. A native of Cochran, GA, Charlie was born on July 19, 1942 to the late Samuel Washington and the late Daisy Coley Washington. In addition to his parents, he was also preceded in death by his maternal grandmother, Pearl Coley. Charlie symbolized his dedication as a Jehovah’s Witness by water baptism on April 29, 1961. He was the first in his family to start regular pioneering in 1964 and subsequently aided many others to become servants of Jehovah. By 1966, Charlie was appointed as a special pioneer and served in Sandersville GA until 1969 when he married the love of his life, Alice Reese. Charlie worked as a Heath Service Technician for 35 years until his retirement in 2002. Charlie had deep interests in both photography and electronics. He had a passion for taking pictures and was known for always having his camera ready to capture smiling faces at every event. Charlie used his skills in photography to do weddings, personal portraits, local school and Pioneer School pictures maintaining a studio in Milledgeville for many years. He also worked in the sound departments for Circuit and District conventions for many years both in English and assisting in Spanish. Charlie was always working in the background and never looked for the limelight. He was very much appreciated for his wisdom, sacrifice and generosity. He also enjoyed serving as an elder and ministerial servant in the Milledgeville South congregation until his death. Charlie is survived by his wife of 52 years, Alice Reese Washington of Milledgeville; his children, Jacquelyn Q. Freeman Ingram of Detroit, MI, Roshanna D. Laws (& husband Grant) of Norcross GA, and Charles Washington of Atlanta; his grandchildren, Latriece K. Freeman, Mario K. Freeman, and Jessica Ingram; his sisters, Virginia Jones, Daisy Whittle, and Mary (& husband James) Kelly; and a host of great grandchildren, nieces, nephews, and other relatives. Condolences may be expressed online at: www.williamsfuneral.net Williams Funeral Home and Crematory of Milledgeville is in charge of arrangements.

The family of Charlie Washington created this Life Tributes page to make it easy to share your memories.