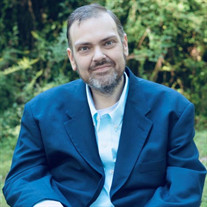 “But they that wait upon the LORD shall renew their strength; they shall mount up with wings as eagles; they shall run, and not be weary; and they shall walk, and not faint.” Isaiah 40:31 (KJV) Mr. Daniel Rhodes Simpson, 36, finished his courageous fight with cancer on November 3, 2021. A funeral service will be held at 11am on November 6, 2021 at Williams Funeral Home in Milledgeville with Rev. James Turner and Fr. David Probst officiating. The family will receive friends at Williams Funeral Home in Milledgeville from 9:30am until the time of service. Daniel was born to the late Quincy A. Simpson and Donna Willoughby Simpson of Toomsboro, Georgia on February 14, 1985. Being a “Valentine’s Baby” it is no surprise that Daniel had a kind, caring, and generous heart. As a man of faith, Daniel’s love for the Lord shone bright, with people often commenting on the light, love, and kindness he displayed, even in the midst of hard times. Daniel enjoyed learning and earned degrees from Central Georgia Technical College, Georgia Military College, and Georgia College & State University. Utilizing his MPA degree, Daniel previously worked as the Professional Development and Training Specialist at Georgia College & State University and as an Adjunct Assistant Professor of Political Science for Georgia Military College. Daniel met the love of his life, Nikki, after graduation and they created a home together in Milledgeville. Having once been a feline-opposed individual, it was a surprise to many when Daniel fell in love with four very specific cats: Donnie, Sammy, Perky, and the late Dusk. Daniel was a lifetime lover of music and photography. He was a member of the Macon Amateur Radio Club and the Monroe County Amateur Radio Society. He had also been a member of the Association for Talent Development, Georgia Political Science Association, and the American Society for Public Administration. He previously held leadership positions, including president, within the Milledgeville Amateur Radio Club and was a member of the American Radio Relay League, for which he served in a number of local and statewide roles. However, his most treasured titles were that of husband, son, brother, friend, and Uncle Zoom. Daniel will be lovingly remembered by his wife, Dr. Crystal Nicole “Nikki” Simpson of Milledgeville; his mother, Donna Willoughby Simpson of Toomsboro; his brothers, Jeffrey S. Simpson of Bethlehem, and Kevin L. Simpson of Bethlehem; his parents in-law, Gregory and Tisha Gay of Eatonton, and his brother-in-law Dave Gay of Eatonton; his cats, Donnie, Sammy, and Perky, as well as many friends who became family. In lieu of flowers, Daniel requested memorial donations be made to the Georgia College Foundation to benefit the Daniel and Nikki Simpson Scholarship. Donations can be made online at https://alumni.gcsu.edu/sslpage.aspx?pid=298. Select Designation of “Other” and include in memory of Daniel Simpson. Scholarship donations can be mailed to Office of University Advancement, Campus Box 96, Milledgeville, GA 31061. Donations can also be made to Animal Rescue Foundation, 711 South Wilkinson Street; Milledgeville, GA 31061.

&#8220;But they that wait upon the LORD shall renew their strength; they shall mount up with wings as eagles; they shall run, and not be weary; and they shall walk, and not faint.&#8221; Isaiah 40:31 (KJV) Mr. Daniel Rhodes Simpson, 36, finished... View Obituary & Service Information

The family of Daniel Simpson created this Life Tributes page to make it easy to share your memories.

“But they that wait upon the LORD shall renew their strength;...