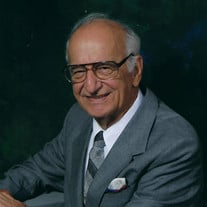 Dr. David Cardoso, age 89, of Milledgeville, passed away Thursday, May 16, 2019. He was born in Colombia, South America, to the late Antonio Cardoso and the late Isabel Alvarez de Cardoso. Dr. Cardoso received his Bachelors of Science in 1949, and went on to receive his Doctorate of Medicine from National University of Medicine in Colombia in 1955. He practiced rural medicine from 1956 until 1957. Dr. Cardoso then served his Internship from 1957 until 1958 at Georgia Baptist Medical Center in Atlanta, and completed his First Year Resident in Internal Medicine in 1959. He served his Full Residency in OB-GYN at Georgia Baptist Medical Center from 1959 until 1962, and served as the Chief of OB-GYN Services at Central State Hospital from 1962 until 1974, having become Board Certified in OB-GYN in 1965 and again in 1979. In 1978, Dr. Cardoso became an Assistant Professor of OB-GYN at Medical College in Augusta, GA fulfilling that role from 1978 until 1989. Dr. Cardoso also worked in Surgical Services at Central State Hospital from 1977 until 1994. In addition to his varied posts throughout the medical profession, he was also Founder of Milledgeville OB-GYN (Cardoso, Goodrich, & Veal) where he was in Private Practice from 1964-1989. Dr. Cardoso was a Fellow of the American College of Obstetrics and Gynecology, a member of the American Medical Association (AMA), a member of the Georgia Medical Association (GMA), and was a Past President of the Baldwin County Medical Society. Dr. Cardoso is survived by: his wife of 58 years, Carol Cardoso; his daughters, Catherine Anna (& Larry) Sweat of Atlanta, GA, and Angela Maria (& David) Cardoso-Woodley of Charlotte, NC ; his son, Carlos David (& Kelley) Cardoso of Suwanee, GA ; his sister, Paz Garcia of California ; and eight Grandchildren. A Celebration of the life of Dr. David Cardoso will be held Saturday, May 25, 2019 at 2:00 PM in the Chapel of Williams Funeral Home. The family will receive friends at the Williams Funeral Home on Saturday, May 25, 2019 from 1:00 PM until the service hour. The family has asked that Memorial Contributions be made in Dr. Cardoso’s memory to Northside Baptist Church, 1001 North Jefferson Street, Milledgeville, GA 31061. Condolences may be expressed online at: www.williamsfuneral.net Williams Funeral Home and Crematory of Milledgeville is in charge of arrangements.

Dr. David Cardoso, age 89, of Milledgeville, passed away Thursday, May 16, 2019. He was born in Colombia, South America, to the late Antonio Cardoso and the late Isabel Alvarez de Cardoso. Dr. Cardoso received his Bachelors of Science in 1949,... View Obituary & Service Information

The family of Dr. David Cardoso created this Life Tributes page to make it easy to share your memories.