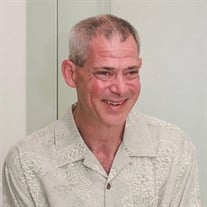 David Stanford Sheppard, age 52, of Milledgeville, passed away Tuesday, March 8, 2022. A Celebration of Life for David Stanford Sheppard will be conducted on Saturday, March 12, 2022 at 2:00 PM in Northridge Christian Church in Milledgeville, with Pastor Mike Waers officiating. The family will receive friends on Saturday, March 12, 2022 at Northridge Christian Church from 1:00 PM until the service hour. David was born in Atlanta, GA, to the late Henry Lamar Sheppard and Dagny Harden. David served as a production supervisor with Grumman, Vought, Triumph, and Qarbon Aerospace for 25 years. He was beloved by all. David was a member of Northridge Christian Church, and he was a veteran who served in the Georgia Army National Guard. He also was a soccer coach/president for many years for the Old Capital Soccer League. David is survived by his wife, Heather Sheppard of Milledgeville ; his daughter, Ashley (& Andrew) Kersey ; his son, David Sheppard (and fiancé, Chelsea Meredith) ; his mom, Dagny Harden ; his 2nd mom, Elaine Sheppard ; his grandson, Asher Kersey ; his brother, Craig Sheppard ; and Jenny Brookins, his cousin who was like his sister ; and many other close relatives. In lieu of flowers, the family has requested that Memorial Donations be made to Northridge Christian Church, 321 Log Cabin Road, Milledgeville, GA 31061. Condolences may be expressed online at: www.williamsfuneral.net Williams Funeral Home and Crematory of Milledgeville is in charge of arrangements.

The family of David Stanford Sheppard created this Life Tributes page to make it easy to share your memories.