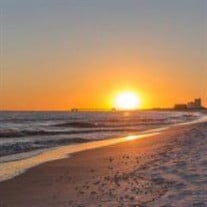 Donald R. Schepper, of 1010 Woodland Terrace, Milledgeville, Georgia, died in his sleep at home on September 28, 2020 at the age of 98. Born in New York, New York, in 1922, Don graduated from St. Thomas Choir School and attended New York University, both in New York City. He served with the US Navy in the Pacific, in Guam and Tinian, during World War II. Don retired, after a long career as an International Sales Representative for Dunn and Bradstreet, in 1984. For most of his adult life, Don and his wife Merion made their home in Dumont, New Jersey. They moved to Mount Pleasant, South Carolina, in 1990, and in 2005 settled in at The Cottages in Milledgeville, where since 2018 he served as the Honorary Mayor. Church and music were always a big part of Don’s life, both as a child and as an adult. As a young boy, he sang in the Boys Choir at St. Thomas Cathedral in New York City. As an adult he was a soloist and choir member at each of the churches to which he and his wife belonged over the years, and in several choral groups, most notably the Haworth Choral Society of Bergen County, New Jersey. As a member of the Reformed Church on the Hill (Cresskill, NJ), he also served as Deacon and Elder, Superintendent of the Sunday School, and Youth Group Leader. Don was a wonderful husband and father, as well as a caring friend to all he came in contact with. His love, kindness, and generosity will long be remembered by family and friends. His beloved wife of 73 years, Merion, predeceased him in 2016. Survivors include his brother Allen (Barbara) Schepper of Corpus Christi, TX; his children: Jeanette (Thomas) Doyle of Eatonton, Meryl (Geoffrey) Moore of Fareham, England, and William (Carol) Schepper of Rock Tavern, New York; six grandchildren; and five great-grandchildren. At Don’s request the family will hold a private interment in New York State. In lieu of flowers, he asked that any memorial gifts be sent to St. Thomas Choir School, 202 W. 58th Street, New York City, New York 10019, designated for the Scholarship Fund.

The family of Don Schepper created this Life Tributes page to make it easy to share your memories.