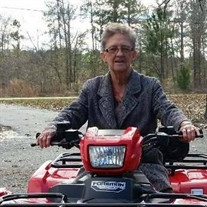 Donna Kay Wood, age 76, of Milledgeville, passed away on Monday, February 17, 2020. A Memorial Service for Donna will be conducted Sunday, February 23, 2020 at 1:00pm in the Chapel of Williams Funeral Home of Milledgeville with Rev. Mac Enfinger officiating.. A native of Toomsboro, lived in Milledgeville for most of her life. She was born on March 10, 1943 to the late James Clinton “J.C.” Wood and the late Juanita Brown Wood Payne, and was also preceded in death by her brothers, Robert “Bobby” Wood and James Edward Wood, and by a sister-in-law, Ethelyn Janes Wood. Donna dedicated her life to the education and mentorship of young people. She received her Education Degree from Georgia Southern University, and she received her Master’s Degree in Physical Education, and her Master’s Degree in Counseling, from Georgia College and State University. Over the course of her career, she served as an Educator in English, Physical Education, and Driver’s Education. Donna had worked in the Wilkinson County School System, as well as being the Girls Basketball Coach for Putnam County High School. In addition, Donna served as Director for the Middle Georgia Girls Scout Council, and Director of Camp Martha Johnston in Lizella. Donna was a member of First United Methodist Church of Milledgeville. Donna is survived by her special friend, Kathy Fountain of Milledgeville ; her niece, Donna Jillea “Jill” Choate (& Kevin) of Austin, TX ; her great nephew, James (& Rane) Choate of Austin, TX ; and great nieces, Aubrey Choate and Vivien Choate, both of Austin, TX. The family has asked that, in lieu of flowers, Memorial Contributions be made to the National Kidney Foundation, 30 East 33rd Street, New York, NY 10016; or to the Girl Scouts; 156 Myrick Road, Millledgeville, GA 31061 Condolences may be expressed online at: www.williamsfuneral.net Williams Funeral Home and Crematory of Milledgeville is in charge of arrangements. .

The family of Donna Kay Wood created this Life Tributes page to make it easy to share your memories.

Donna Kay Wood, age 76, of Milledgeville, passed away on Monday,...