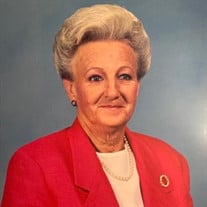 Doris Connell Prosser, age 85, of Milledgeville, passed away Wednesday, January 13, 2021. Funeral services for Doris Prosser will be conducted Sunday, January 17, 2021 at 3:30pm in Northside Baptist Church Thrive Building with Dr. Jerry Pickard officiating. Interment will follow in West View Cemetery. The family will receive friends at the Williams Funeral Ho0me in Milledgeville on Saturday, January 16, 2021 from 3:00pm until 5:00pm. Doris was born on November 3, 1935 in Toomsboro, GA to the late Leonard Connell and the late Lenoie Mercer Connell. In addition to her parents, she was also preceded in death by her husband, Walker Thomas Prosser, by a son, Gary Lynn Prosser, and by her siblings, Robert Earl Connell, Wendell Lamar Connell, Harold Eugene Connell, Sybil Maurine Jaramiallo, Margaret Oleane Rogers, and Charles Thomas Connell. Doris was a lifelong gardner, who loved raising vegetables and flowers. She was a widely renowned cook, and enjoyed cooking and sharing with family and friends. A very devoted mother and grandmother, she shared her love with close neighbors and friends. Doris was a sincere Christian, who loved God and her church at Northside Baptist Church. One of her other lifelong hobbies and interests was fishing, in which she often claimed that she could catch the most and biggest fish. Doris is survived by: her children, Anthony Ray Prosser (& Sherry) of Milledgeville, Sandra Denise Stubbs (& Tommy) of Milledgeville, Donna Kay Smith (& David) of Milledgeville, Timothy L. Prosser (& Cindy) of Eatonton, and Patrick Thomas Prosser (& Kendra) of Milledgeville ; her siblings, Frances Connell Moody of Dublin, Leonard Edward Connell (& Sherry) of Irwinton, and Shirley Connell Fountain (& Jimmy) of McIntyre ; 11 grandchildren ; and 3 great grandchildren. Condolences may be expressed at: www.williamsfuneral.net Williams Funeral Home and Crematory of Milledgeville is in charge of arrangements.

The family of Doris Connell Prosser created this Life Tributes page to make it easy to share your memories.