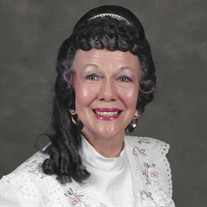 Dorothy Mae “Dot” Keys Kerce, age 93, of Milledgeville, passed away Sunday, October 11, 2020. A Celebration of Life for Dot Kerce will be conducted Sunday, October 18, 2020 at 2:00 PM in Victory Baptist Church with Rev. Kenny Walker officiating. Interment will be private. The family will arrive at the Victory Baptist Church at 1:30 PM on Sunday, October 18, 2020 for anyone who would like to visit. Born in Byron, Georgia on August 10, 1927, Dorothy Mae Keys (‘Dot’), was born the daughter of the late Walter Hill Keys and the late Vallie Ailene Stokes Keys. She married the love of her life, Johnny Ashley Kerce, Sr., 13 days after her 15th birthday. They were married for 58 1/2 years when he went to heaven in December 2000. This year she stated in celebration, that she and ‘Daddy’ have now been married for 78 years. She was also preceded in death by a daughter, Deborah K. Bailey, and by her sister and all three of her brothers. Her claim to fame and goals in life were being the best wife, and the best mother to her four children. Dot’s love, dedication, optimism, gentleness and strength ensured that she exceeded those goals. She was so much more than her self-proclaimed job title of ‘domestic engineer’. Her sweet spirit and perfect example of being a Godly woman reached far beyond family, and touched everyone she knew. Just being around Granny Dot helped to make you a better person because she set the perfect example and had high expectations of everyone! Dorothy Kerce’s family celebrates her life, love and legacy, knowing that she is now dancing on streets of gold and loving her Lord Jesus, reunited with family in her new heavenly body. Dorothy is survived by: her children, Johnny Ashley Kerce, Jr. (& Nancy) of Macon, Linda K. Kerce (& Bob) of Milledgeville, and Brenda K. Veal (& Richard) of Lugoff, SC ; 8 grandchildren ; 18 great grandchildren ; and 12 great great grandchildren. The family has asked that those who wish, make Memorial Contributions to the church that she adored, Victory Baptist Church, 640 Meriwether Road, NW, Milledgeville, GA 31061. Condolences may be expressed online at: www.williamsfuneral.net Williams Funeral Home and Crematory of Milledgeville is in charge of arrangements.

The family of Dorothy Mae "Dot" Keys Kerce created this Life Tributes page to make it easy to share your memories.