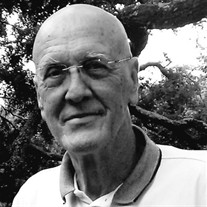 Funeral services for Dug Grimes will be conducted Wednesday, September 25, 2019 at 3 PM in Williams Funeral Home Chapel with Military Honors. The family will receive friends on Wednesday from 2 PM until the service hour. H. Duggan (Dug) Grimes, age 82, was born August 27, 1937 in Baldwin County, Milledgeville, GA to Charlie Clark Grimes, Sr. and Nina Louise Taylor Grimes. He was the second of six children born in this union. Preceding him in death are his parents, his infant sister, Linda Fay Grimes, his brother, Charlie Clark Grimes, Jr. and his only child, Gregory Duggan Grimes. Dug is survived by his wife of 62 years, Jo Ann Williams Grimes of Milledgeville, formerly of Gibson, GA., a granddaughter, Tiffany Shannon Grimes of Easley, SC., two great-granddaughters, Savannah Thompson and Kiley Caldwell, three brothers, Richard (Sheila) of Riverton, Utah, Bo (Pam) of Redding, California, and Ben (Dottie) of Elmo, Utah. Dug grew up in Milledgeville where he attended Georgia Military College before joining the Marines where he excelled in winning outstanding recruit in Boot Camp at Paris Island, S.C. He also was highest scorer on the Rifle Range, Expert Marksman, Platoon Leader and received a Meritorious Promotion, all as an enlisted Marine. He was stationed in Kaneohe, Hawaii for two years where he took his new bride in 1958 to start a new life together. After discharge in 1960, they moved to Salt Lake City, Utah where he attended Salt Lake Technical Engineering Institute and the University of Utah. He returned to Milledgeville, in 1962 where he began his career in the mobile home industry as a Draftsman at American Coach Company and devoted more than 25 years in the industry working for several manufacturers in Georgia, Alabama, Texas and Colorado, ending his career as President of Bellcrest Homes in Millen, Ga. He took a 5 year break from the industry when they lost their only child and worked for the State of GA Department of Corrections serving as Deputy Warden of Administration in Davisboro, Ga. Dug and Jo traveled extensively both abroad as well as in their motorhome as long as health permitted. He also loved fishing, hunting and barbecuing brisket. He was an active member of the Church of Jesus Christ of Latter Day Saints.

The family of Dug Grimes created this Life Tributes page to make it easy to share your memories.

Funeral services for Dug Grimes will be conducted Wednesday,...