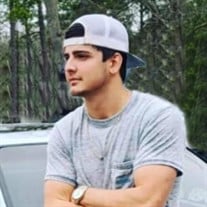 Dylan Cole Griffin, age 23, of Milledgeville, passed away Saturday, June 6, 2020. Funeral Services for Dylan Griffin will be conducted for the family, with social distancing recommended, on Tuesday, June 9, 2020 at 3:00pm in the Chapel of Williams Funeral Home. Interment will follow in Baldwin Memorial Gardens beside his grandpa Buddy. The family will receive friends at the Williams Funeral Home on Tuesday, June 9, 2020 from 1:00pm until 3:00pm. A lifelong resident of Baldwin County, Dylan was born in Milledgeville on March 31, 1997. He graduated from Jones County High School, and was enrolled in Central Georgia Technical College. Dylan worked at The Tint Shop in Milledgeville, and was a member of the Christian faith. He was an avid outdoorsman, with a passion for hunting and fishing. Dylan was also a shooting enthusiast, excelling in rifle, pistol, and shotgun sports and competitions. His sense of humor and zest for life were legendary. Dylan was preceded in death by his Grandfather, Buddy Madden, by his grandmother, Barbara Ann Rupert, and by an Aunt, Tina Griffin. Dylan is survived by: his mother and stepfather, Lori and Stephen Tankersley of Statesboro ; his father and stepmother, Marty and Sheila Griffin of Haddock ; his siblings, Carly Campbell of Statesboro, Colby, Jaydon, and Riley Griffin, all of Milledgeville, Rachel and Steele Tankersley of Savannah, Hunter Brett of Milledgeville ; Aunts and Uncles, Dena and Chris Colson of Statesboro, Leslie Madden of Milledgeville, Anthony and Caroline Madden of Thomasville, Angie and Mark Branstrom of Macon, Summer Elson of Eatonton, Grandparents, Sharon Madden of Statesboro, and Bobby and Ruby Griffin of Milledgeville. The family will accept flowers, but has asked that those who wish to make Memorial Contributions to the National Rifle Association, 11250 Waples Mill Road, Fairfax, VA 22030, or at: donate.nra.org Williams Funeral Home and Crematory of Milledgeville is in charge of arrangements

Dylan Cole Griffin, age 23, of Milledgeville, passed away Saturday, June 6, 2020. Funeral Services for Dylan Griffin will be conducted for the family, with social distancing recommended, on Tuesday, June 9, 2020 at 3:00pm in the Chapel of... View Obituary & Service Information

The family of Dylan Griffin created this Life Tributes page to make it easy to share your memories.