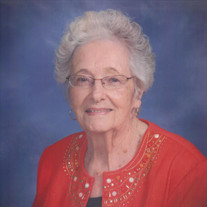 Elizabeth Hill Rush, age 94, of Milledgeville, passed away Thursday, October 22, 2020. A Celebration of Life will be held on Monday, October 26, 2020 at 11 am at Kingsland United Methodist Church with Pastor Bruce Vaughn presiding. Visitation will be from 10 to 11am at the Church. Covid-19 precautions will be strictly enforced for the health of all. Pallbearers: Meredith Hill III, Walter Barineau, Terry Stover, Jim Greer, and Burt Wright. Honorary Pallbearers: Morris Peeples, Kevin Byrd, Tom Turner, and Pat Brown. Elizabeth Hill Rush died on 10/22/2020. She was born on March 16, 1926 in Kingsland, GA, the daughter of M. L. Hill, Sr. and Beulah Register Hill. She was predeceased by her husband, Joseph Methvin Rush, by a sister, Joyce Hill Barineau and a brother, brother, M. L. Hill, Jr. She attended school at Kingsland High School and graduated from Glynn Academy in Brunswick in 1943. Graduating from the University of Georgia in 1947, she began her career as Director of Welfare in Camden County. She was married to Joseph M. Rush on May 15, 1949, who passed away after 59 years of marriage. She and Joe lived in Savannah and Macon before returning to Camden County in 1956. She was a member of First United Methodist Church where she served on the Official Board, choir member, UMW, Sunday School teacher, Volunteer at local hospital, charter member of the DAR, Delta Kappa Gamma and Alpha Delta Pi sorority. She taught in Camden County for 25 years before retiring in 1987. She is survived by a daughter; Lisa Rush Simpson (Toby), two grandsons; Ryan Sampson (Gillian) and Kyle Sampson (Meri). Four greatgrandchildren; Cooper, Brooklyn, Will and Jack. In lieu of flowers, the family has requested that Memorial Contributions be made to either the Kingsland First United Methodist Church, 120 East William Avenue, Kingsland, GA 31548, or to the Milledgeville First United Methodist Church, 366 Log Cabin Road, NE, Milledgeville, GA 31061. Condolences may be expressed online at: www.williamsfuneral.net Allison Funeraal Home of Kingsland, GA in conjunction with Williams Funeral Home and Crematory of Milledgeville is in charge of arrangements.

The family of Elizabeth Hill Rush created this Life Tributes page to make it easy to share your memories.