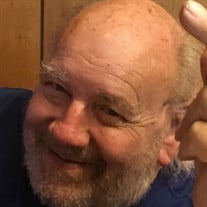 Frank J. “Skeets” Kump, age 81, of Jonesboro, passed away on Saturday, February 13, 2021. A celebration of life will beheld in the Spring. Skeets was born on December 22, 1939 in Mount Vernon, New York, Of the Late Francis J Kump Sr. and the Late Isabel Kump.He attended Mount Saint Michael Catholic High School, in Bronx, New York. After graduation they all moved to Miramar, Florida. He joined the United States Coast Guard in 1960 and went to Engineman School in Groton, Connecticut. He was stationed on the Cape Kennedy Light Station, Patrick AFB, Fla. Then was on the last manned duty of the Sombrero Key Light House, Key West, Fla. off of the 7 Mile Bridge. He was a Hollywood, Fla. Firefighter. He moved to Atlanta, Georgia and South to Griffin, Georgia, where he formed his own company, Southern Sales of Griffin, a manufacturers rep company in the Fall Goods, Hunting and Gun industry. He met and Married Judy Forsythe Kump from Miami, Florida, 1976, moving to Jonesboro. He joined the Ackerman Security Company in 1983 under the management of, Burt Kolker. His favorite past time was salt water fishing and was a charter member of the Atlanta Salt Water Sportsman’s Club. Skeets and Judy won The Bob L Lynn Award for love of the sport and contributions to the club (2 Lake picnics a year and preparing the Club yearbook). He is survived by his loving wife of nearly 45 year, Judy Forsythe Kump, of Jonesboro. Also survived by His sons, Joe Kump and wife Jan Maxwell Kump of Gordon, along with Grandchildren, Tyler Kump and Ashlyn Kump and Son Chris Kump of Thomaston, GA. Sister, Karen Lattanzia and husband Chuck of Pinnelas Park, Fla. And Sister in-law, Linda Forsythe Posada and husband Danny Posada of California. Also survived by Nephews, Eric Lattanzia, Brent Posada and Tim Posada, and a Niece, Alisha Lattanzia and his many Cat Children He was preceeded in death by his parents and former wife Barbara Udvarlhey Kump, Mother of Joe and Chris.

The family of Francis Joseph "Skeets" Kump, Jr. created this Life Tributes page to make it easy to share your memories.