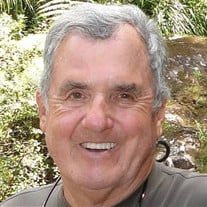 Fred Williams Brady, age 79, of Greensboro, passed away Friday, November 15, 2019. Services for Fred Brady will be conducted Saturday, December 7, 2019 at 11:00 AM in the Lake Oconee Church. A celebration of life will immediately follow. Details will be provided via website below. One simple phrase describes Fred … “He loved.” He loved his family. He loved his wife of 55 years (Jere), who he called his rock. He loved his sons (Scott and Michael), the mothers of his grandchildren, and his grandchildren. He loved his brother and brother-in-law and their families. He even loved his in-laws! He loved the arts, especially music. Until his cancer diagnosis in 2013, he began the day singing in the shower and often continued throughout the day. He had a fabulous voice and his claim to fame was his rendition of “Danny Boy”. Fred could watch the same movie scene from an old musical over and over, rewinding with a tear in his eye. He loved to travel. His favorite trip was the month he and Jere lived in Paris on the Seine, sharing pastries from the boulangerie downstairs, wandering the streets, and taking in every single piece of history. He loved to tell a story. Fred would place a hand on the listener’s arm, commanding attention until the story was complete, often ending with his signature giggle. He loved people. He treated everyone equally and always called waiters, caddies, and hotel staff by their name. He loved golf and his golfing buddies. The sport was his passion, even when his buddies gave him a hard time about his game. He also loved skiing. In fact, Fred water skied on his 79th birthday last June to the delight of his grandchildren. He loved a good party and could light up a room. Jere often said she wanted to rent him out because when he walked into the party, the laughing would start. He loved the simple things, too… a long walk with Jere and his dog in the morning, making lattes and mai tais, watching golf on TV, reading a good book, and manning the grill. Fred spent most of his career in sales, beginning in 1961 at the Navy Exchange in Norfolk, Va., where he met Jere. (Although they dated for three years before getting married, they only spent 90 days in the same place!) Jere encouraged Fred to earn a college degree, so he joined the Air Force and completed two years. He then attended the University of Missouri in Kansas City. After college began the family’s 10 moves while Fred worked as a sales rep with Gillette and Bomar Calculator Company. He often joked he was on the witness protection program! Finally landing in Atlanta, Fred formed Gemini Marketing, representing consumer electronic companies. Prior to his retirement, in 2003, Fred joined the Fortune Group, providing management training to companies’ leadership. Fred and Jere built their home at Reynolds Lake Oconee in 1999, moving there full time in 2003. The move enabled Fred to play golf every day and he couldn’t have been happier. Fred was a founding contributor for the Pete Nance Boys and Girls Club in Greensboro because he credited the Boys Club in Norfolk for helping to “keep him out of jail as a kid.” He spent many years coaching soccer for his son Scott’s team and though he didn’t officially volunteer for community service, he gave many hours throughout his life by helping Jere. Just two letters separate the words love and life, but for Fred they were one in the same. Survivors include: his wife, Jere Brady of Greensboro ; his sons, Michael Patrick(& Maria) Brady of Sandy Springs and Scott Alexander Brady of Decatur ; a brother, Patrick (& Terry) Brady of Richmond, VA ; and three grandchildren. In lieu of flowers, the family has requested that Memorial Contributions be made to the Pete Nance Boys and Girls Club Capital Campaign, PO Box 474, Greensboro, GA 30642

Fred Williams Brady, age 79, of Greensboro, passed away Friday, November 15, 2019. Services for Fred Brady will be conducted Saturday, December 7, 2019 at 11:00 AM in the Lake Oconee Church. A celebration of life will immediately follow. Details... View Obituary & Service Information

The family of Fred Brady created this Life Tributes page to make it easy to share your memories.