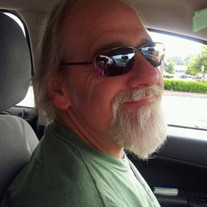 Mr. Gary Wayne Dabney, 63, passed away on Friday, October 2, 2020. A memorial service will be held at Williams Funeral Home on Sunday, November 8, 2020 at 2 P.M. Inurnment will be held Georgia Veterans Memorial Cemetery at a later date. Mr. Dabney was born in Petersburg Va and was raised in Richmond, VA before serving in the United States Marines. He moved to Deepstep Ga in 1994 and he spent the last 4 years in Milledgeville. He was a truck driver for Howard Sheppard, BH trucking and finally Gemi Trucking. He was the son of the late James Lee and Phyllis Clatterbaugh Dabney, and preceded in death by sister, Janet Dabney, and grandson, Zeke Huffman. He leaves to remember and mourn his loss; wife, Ruth C. Dabney of Milledgeville; daughters, Melissa Jones of Milledgeville, Amanda Dabney Newman of Hopewell, VA, and Charidy Dabney Huffman; sons, Tim Konzelman of Milledgeville, and Travis Konzelman of Augusta as well as 8 grandchildren, Kathleen, Kimberly, Kamden, Aryannah, Kei’ Lani, Emily, Shawn and Matthew; and 4 great grandchildren Addisynn, Brookelynn, Kensington and Ridge. Gary Dabney leaves both his friends and family—they all know who they are—with many years of memories and laughter to cherish. Mr. Dabney kept two parts of his life close to heart, serving in the Marines and his family. Semper fi

The family of Gary Dabney created this Life Tributes page to make it easy to share your memories.