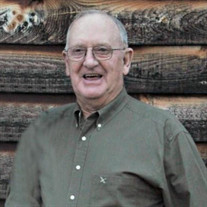 Mr. Walter “Glenn” Ray, Sr., 79, passed away on April 29, 2020. A Graveside Funeral Service will be held on Sunday, May 3, 2020 at 3 PM in Black Springs Baptist Church Cemetery with Rev. David Perry officiating. * Services will be Live Streamed. * Friends and family members may independently stop by for Viewing and to sign the Guestbook on Saturday, May 2, 2020 from 1:00pm until 5:00pm. Mr. Ray was a native of Spalding County and had made his home in Milledgeville since 1968. He was the son of the late William Walter Ray and the late Mary Burnell Anderson Ray. Mr. Ray had retired from the Georgia State Patrol and was the owner of Ray Construction. He was a member of Black Springs Baptist Church. He is survived by his wife, Dianne Ray; daughter, Tonya Crager (Steven) of Milledgeville; sons, Danny Ray (Jennifer), Glenn Ray, Jr. (Marde) all of Milledgeville; grandchildren, Amber, Nick, Will, Chris, Matt, Jared, Rachel, Jonas, and Eli; great grandchildren, Benjamin, Hayden, Addison, Jordan, Abigail, Lily, Dean, Axel, and Bristol. For those who wish Memorial Contributions may be made to Black Springs Baptist Church or to the Georgia Sheriff’s Youth Home. Express online condolences at www.williamsfuneral.net Williams Funeral Home and Crematory of Milledgeville is in charge of arrangements.

The family of Glenn Ray Sr. created this Life Tributes page to make it easy to share your memories.