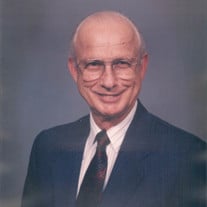 Hallie "Hal" Huron Olive, Jr. 1928 – 2018 Hallie “Hal” Huron Olive, Jr., 90, passed away at his home at Lake Sinclair, Georgia on Wednesday, November 28, 2018. Prior to moving to Lake Sinclair, Hal lived in Dawsonville, Georgia for 15 years and Elizabethtown, Kentucky for 24 years before that. Hal was born in Ellenton, Georgia and spent many years in South Georgia. Later he attended Georgia Middle Junior College. In 1948, Hal joined the U.S. Navy for four years during the Korean War where he was a radar instructor for airplane pilots. He left military service in 1952 and attended the University of Florida on the G.I. Bill. Hal graduated in 1955 with a BS degree. In 1956, he married Irene Schulz; his wife of 62 years. They had twin girls and two boys. Hal worked for Firestone and Goodyear before joining Georgia Pacific where he worked for 20 years. He retired in 1994. He was an active member at church and Sunday school at Memorial United Methodist Church in Elizabethtown, Kentucky and First United Methodist Church in Cummings, Georgia. Hal is preceded in death by his parents, four brothers, a sister, and a daughter Debra Olive Buchanan. He is survived by his wife Irene, his daughter Edith/Darrell Keith, his sons Mark/Dawn Olive and Craig Olive, sister-in-law Juanita Olive, son-in-law David Buchanan, 8 granddaughters, one grandson, and 7 great grandchildren. A memorial service will be held on Saturday, December 1, 2018 at 2:00 pm at Williams Funeral Home, Eatonton, Ga. Visitation will be held prior to the service beginning at 1:00pm. In lieu of flowers, expressions of sympathy may be made as contribution to: The Michael J. Fox Foundation for Parkinson’s Research. Grand Central Station, PO Box 4777, New York 10163-4777.

The family of Hal Olive created this Life Tributes page to make it easy to share your memories.