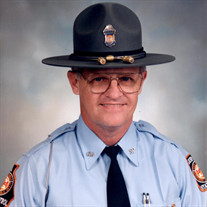 Clarence “Harvey” Holloway, of Milledgeville, Georgia, passed away on Sunday October 17, 2021 at the age of 76. Harvey was born on August 4, 1945 in Thomaston, Georgia to Clarence and Louise Holloway. Harvey joined the Georgia State Patrol after graduating from high school in 1963 as a radio operator. In 1966 Harvey was drafted to serve in the U.S. Army. He was Honorably Discharged at the rank of Sergeant in 1968. Not only did Harvey serve his country, he served the citizens of Georgia for 34 years. In 1997 Harvey retired from the Georgia State Patrol as Sgt. First Class, Post Commander Post 33 in Milledgeville. After his retirement, he flew several years as a part time pilot for the Georgia Forestry Commission He loved to be with family and was always up for a road trip, reunion or gathering of friends. He always had a story to share or a joke to tell. He was committed to various groups and organizations and always willing to volunteer in leadership positions. He was an active member of several Christian motorcycle groups. He enjoyed camping with the Lucky 13 Good Sams. He was the strong patriarch of his family and a good friend to all. He was a good father who always took care of his children and did the best he could to teach and guide them, a loving grandfather and great-grandfather. He was a great example as a husband, being married to his wife for 57 years, as a father, and as a Christian. He is preceded in death by parents, Clarence and Louise Holloway and sister, Bernice Elliott. Harvey is survived by loving wife, Toni Holloway of Milledgeville, Georgia; children, Mark Holloway (Lori) of Macon, Georgia, Tina Holloway Gillian (Scott) of Milledgeville, Georgia, Grandchildren Jordan Holloway, Taylor Holloway (Kellina), Josey Gillian and Nick Gillian; Great Grand-daughter Winry June Holloway. Visitation will be held on Thursday, October 21, 2021 at 12PM with the funeral service at 1PM at Northside Baptist Church, Milledgeville, Georgia. In lieu of flowers, expressions of sympathy may be made to Northside Baptist Church.

Clarence &#8220;Harvey&#8221; Holloway, of Milledgeville, Georgia, passed away on Sunday October 17, 2021 at the age of 76. Harvey was born on August 4, 1945 in Thomaston, Georgia to Clarence and Louise Holloway. Harvey joined the Georgia State... View Obituary & Service Information

The family of Harvey Holloway created this Life Tributes page to make it easy to share your memories.