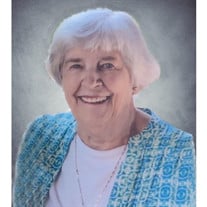 Graveside services for Mrs. Helen Waller will be Private, for immediate family only, but will be livestreamed on Monday, January 4, 2021 at 11:30 AM on our facebook page, https://business.facebook.com/williams.f.home/ The service will also be available to watch from her Memorial Page, on the funeral home website after 2:00pm on the same day: https://www.williamsfuneralhome.net/obituaries/Helen-Waller-6/ Helen Taylor Broach Waller died peacefully at her home on December 25, 2020, in Milledgeville, Georgia at the age of 89. Helen Waller was born at Crawford Long Hospital in Atlanta, Georgia, on May 16, 1931, to the late Raymond Charles Broach and Helen Taylor Baumgartner. Mrs. Waller moved to Rome, Georgia, at the age of six and lived there until she was eleven years old. On October 17, 1942, the Broach family moved to Macon, Georgia. Mrs. Waller graduated from Miller High School in 1948 where she was member of Delta Omega Mu sorority. She graduated from Huntingdon College in Montgomery, Alabama where she met Carl Leon Waller in 1951. The following year they were married on November 28, 1952 at First Presbyterian Church of Macon, Georgia. Mr. and Mrs. Waller lived in Birmingham and Dothan, Alabama, before moving back to Macon in 1955. Mrs. Waller was a lifetime member of First Presbyterian Church in Macon where she and her husband were members of the Somerville Sunday School Class. She was involved in the Civic Woman’s Club, Macon Service League, Daughters of the American Revolution, Bridge Clubs, and an active member of the P.E.O. sisterhood and Idle Hour Golf and Country Club. After Mrs. Waller’s husband died in 2012, she moved to Milledgeville in January 2014. She joined First United Methodist Church where she was an active member. Mrs. Waller enjoyed attending the Master’s Golf Tournament each year with her husband, travelling abroad, family trips to St. Simon’s Island, and playing bridge with friends. Mrs. Waller will be remembered for her strong faith in God and her unwavering love for her family. She was preceded in death by her husband Carl L. Waller Jr. and a brother, Raymond A. Broach. Mrs. Waller is survived by her three sons and one daughter; Carl L. Waller III (Susan) of Marietta, GA, Raymond B. Waller of Milledgeville, Helen W. Pursley (Gus) of Milledgeville, and George T. Waller (MaryBeth) of Foley, Alabama; six grandchildren; Carrie W. Weatherford (Jason) Roswell, GA, Helen Marie P. Davenport (McKenzie) Milledgeville, John A. Pursley IV (Jean) Milledgeville, Carl L. Waller IV, Eliza P. Smith (Garrett) Milledgeville, Molly W. Price (Scott) Marietta, GA, and nine great grandchildren. She is also survived by a sister Mrs. Harold W. King of Athens, GA, and a brother, Bill H. Broach (Barbara) of Lafayette, CA and many nephews and nieces. Mrs. Waller touched the lives of many people and will be deeply missed by all who knew her. The family would like to give a special "Thank you" to her caregivers, Sylvia Davis, Margie Dean, and Bernasta Waller. In lieu of flowers, donations may be made in memory of Helen Broach Waller to First United Methodist Church Building Fund or Noah’s Ark Weekday School.

Graveside services for Mrs. Helen Waller will be Private, for immediate family only, but will be livestreamed on Monday, January 4, 2021 at 11:30 AM on our facebook page, https://business.facebook.com/williams.f.home/ The service will also be... View Obituary & Service Information

The family of Helen Broach Waller created this Life Tributes page to make it easy to share your memories.

Graveside services for Mrs. Helen Waller will be Private, for...