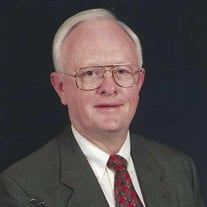 Herbert Dee “Herb” Warren, age 82, of Milledgeville, passed away Tuesday, August 10, 2021. Funeral services for Herb Warren will be conducted Saturday, August 21, 2021 at 11:00 AM in the Eatonton First United Methodist Church in the Historic Sanctuary with Rev. David Wofford officiating. The family will receive friends on Saturday, August 21, 2021 at the Eatonton First United Methodist Church from 10:00 AM until the service hour. Herb was born on March 2, 1939 in Metter, GA, to the late Othello Herbert Warren and the late DeAlva Brown Warren. In addition to his parents, he was also preceded in death by a brother, C.B. Warren. Herb lived in Atlanta for a number of years, and retired from the World Congress Center. Herb loved RV’ing, and has been a visitor to every state in the continental United States, and Canada. He was a volunteer at the Plaza Old School History Museum in Eatonton and also was a volunteer at Putnam General Hospital. Herb was also a Free and Accepted Mason, a member of the Yaarab Shrine, the Stone Mountain Shrine Club, and the Scottish Rite Bodies. He was a member of the Eatonton First United Methodist Church. Herb is survived by his wife, Martha Griggs Warren of Milledgeville ; his son, Richard “Rick” (& Cindy) Warren of Macon ; his brother, Jim (& Linda) Warren of Jefferson ; 2 grandchildren, Michelle Warren and Michael Warren ; and 2 great grandchildren, Jack Wilson and Emily Moss. In lieu of flowers, the family has asked that Memorial Contributions be made to the Eatonton First United Methodist Church, 103 W. Magnolia Street, Eatonton, GA 31024. Condolences may be expressed online at: www.williamsfuneral.net Williams Funeral Home and Crematory of Milledgeville is in charge of arrangements.

The family of Herbert Dee "Herb" Warren created this Life Tributes page to make it easy to share your memories.