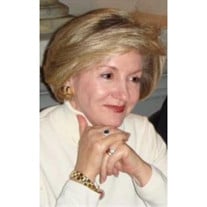 Hilda Ringsrud quietly and peacefully ascended to her heavenly home on December 17, 2021. A celebration of Life will be held on Tuesday, December 28,2021 at 2 P.M. in Williams Funeral Home Chapel . The family will receive friends from 1 P.M. until service time. Hilda was the daughter of the late Mr. and Mrs. James Haynes of Cullman, Alabama. After graduating from Cullman High, Hilda received a BS from the School of Chemistry at the University of Alabama. She continued her education at the University Hospital earning a MT (ASCP) with her research being published in the “Journal of Bacteriology”. During her long career with the State of Georgia, Hilda worked as Manager of Clinical Microbiology at Central State Hospital and served as Laboratory Director in both the Macon and Albany Public Health Laboratories. She also participated in professional development opportunities at the Center for Disease Control, Medical College of Georgia, Texas Department of Health, Florida Department of Health, and Georgia Department of Public Health. Some of Hilda’s passions included antiquing, ballroom dancing, games, music, travel, and being with her family and friends. She was affectionately called “Gammy” by her grandchildren. She was an avid bridge player, fascinated by the click of Mahjongg tiles, and addicted to Alabama football. She truly believed Paul “Bear” Bryant could walk on water. She was a member of Milledgeville’s First United Methodist Church and Emmaus Sunday School Class, Town and Country Garden Club, P.E.O. Sisterhood – Chapter AP and very generous in the support of many charities. Hilda was preceded in death by her husband Rian, the love of her life, to whom she devoted much time and energy as a caregiver. Those left to cherish her memories are her two children Ashley Ringsrud Smith and Rian Ringsrud (Ragan), three beautiful grandchildren Kinsley Smith and Mason and Caroline Ringsrud, and sister Dodie Shearer (Phil). . Her earthly remains will be permanently placed in the Columbarium at the Georgia War Veterans Memorial Cemetery in Milledgeville with her husband. Friends who wish may make memorial contributions to First United Methodist Church, 366 Log Cabin Road, Milledgeville GA 31061. A LIFE WELL LIVED!!!

Hilda Ringsrud quietly and peacefully ascended to her heavenly home on December 17, 2021. A celebration of Life will be held on Tuesday, December 28,2021 at 2 P.M. in Williams Funeral Home Chapel . The family will receive friends from 1 P.M.... View Obituary & Service Information

The family of Hilda Ringsrud created this Life Tributes page to make it easy to share your memories.

Hilda Ringsrud quietly and peacefully ascended to her heavenly...