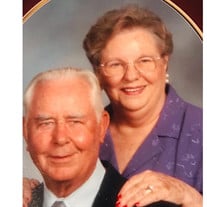 Hubert Thompson went home to be with the Lord on March 12th at the age of 93. His life’s journey began in Twiggs County on May 29, 1928. He married the love of his life,Janette Patricia Hight, August 29, 1946. Hubert began working for Georgia Kaolin as a teenager and continued for forty-four years both in Dry Branch and in the home office in New Jersey. After retirement he enjoyed a second career with Sandersville Leasing for another eighteen years. Hubert’s faith, strength of character, and determination served as shining examples to his family and friends. Hubert and Janette were faithful members of Northside Baptist Church where they served the Lord for many years. His love of golf was known to all who knew him and gave him countless hours of enjoyment and fellowship with those who played with him. Hubert’s larger than life personality made him a master storyteller and he delighted in sharing stories with friends and even people he did not know. As his mind and body weakened over the last months, his love and concern for his family never waivered. He was preceded in death by his beloved bride of 71 years, Janette Patricia Thompson and grandson Tim Mustain. He is survived by his daughter Trish Ann Thompson of Milledgeville; son Jim Thompson of San Antonio,Tx.; daughter Nancy Clayton (Anthony) of Timberlake, NC.; and grandchildren Stacy Thompson (Jeff Chappuis), Michael Thompson (Jamie), Courtney Clayton, Riley Thompson, Brayden Thompson and great-grandchildren Riley Mustain, Brendan Mustain and Aidan Clayton. His bride Janette went home to Heaven four years ago and he has longed for the day he would be with her again. That desire became reality when he stepped into Heaven March 12, 2022. Family will receive visitors Thursday, March 17th at 1:00pm at Northside Baptist Church, followed by a Celebration of Life in the sanctuary at 2:00pm with Dr. Jerry Pickard officiating.. In lieu of flowers, donations may be made to The CIA Class of Northside Baptist Church 1001 N.Jefferson St. Milledgeville, Ga. 31061.

Hubert Thompson went home to be with the Lord on March 12th at the age of 93. His life&#8217;s journey began in Twiggs County on May 29, 1928. He married the love of his life,Janette Patricia Hight, August 29, 1946. Hubert began working for... View Obituary & Service Information

The family of Hubert Thompson created this Life Tributes page to make it easy to share your memories.

Hubert Thompson went home to be with the Lord on March 12th at...