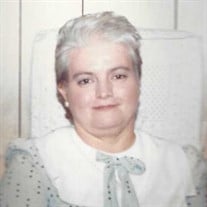 Irene Oliver, age 72, of Baldwin County, passed away Saturday, January 16, 2021. Services for Irene Oliver will be conducted Thursday, January 21, 2021 at 3:30pm in Williams Funeral Home Chapel. The family will receive friends at the Williams Funeral Home on Thursday, January 21, 2021 from 2:00pm until 3:00pm. A native of Toomsboro, Irene was born on October 31, 1948 to the late Tom Oliver and the late Lucille Doris Miller Oliver. In addition to her parents, she was also preceded in death by her sister, Pauline Brown, by her brothers, John Oliver, Milton Oliver, and Miller Oliver, and by a brother-in-law, Jesse Heaton. Irene attended Freedom Church. Irene is survived by: her sons, Ricky Smith and Chris Smith (& Andrea) ; by her daughter, Vickie Smith ; by her sister, Mildred Heaton ; by her grandsons, Tommy Register and John Register ; by her granddaughter, Aleece Smith ; and by several nieces and nephews. The family has suggested that those who wish, may make Memorial Contributions to Serenity Hospice, 2601 N. Columbia Street, Suite F, Milledgeville, GA 31061. Condolences may be expressed online at: www.williamsfuneral.net Williams Funeral Home and Crematory of Milledgeville is in charge of arrangements.

The family of Irene Oliver created this Life Tributes page to make it easy to share your memories.