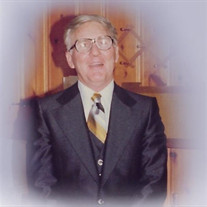 Jack Collins, age 94, passed away Tuesday, July 17, 2019 at his home on Lake Sinclair. Services will be held at Pierce Memorial United Methodist Church on July 27, 2019 at 3 pm. Visitation will be at 2 pm in the Church Annex and there will a reception following the service. Jack Collins was a devoted spouse, wonderful father and grandfather, great friend and neighbor, and inspiration to us all. He will be missed, and we are all worse off having lost him. Words cannot explain the void created by his departure of this world. We love you Jack and will always be thinking of you! Jack was born in Arlington, Georgia but moved to Sarasota, Florida as a young child, where he remained until he joined the Marines in 1942. He was assigned to the Fourth Marine Division and was stationed in several locations during World War II. Jack traveled all over the world during his military service but returned to Florida once his service ended. Jack played baseball as young man, even while in the military, but after returning to Florida he joined the Florida State League. Jack moved to Sparta, Georgia in 1948 when the Sparta Saints bought his baseball contract from Tampa Bay. He played in the Georgia State Minor Baseball League in Sparta and Dublin for several years, along with numerous friends who also came to town through the League. Jack met Joann while he was playing baseball in Sparta and they were wed August 10, 1950. They moved to Florida after their marriage, but quickly returned to Sparta where they spent the next 36 years building a family and contributing to the community. Jack worked at a service station owned by Joann’s father, Iverson “Boots” Johnson, after leaving baseball. Jack eventually became the owner of his own service station, Collins Chevron, where he employed numerous young men from the community and even employed his wife, Joann, as the accountant for the business. While Jack was still running Collins Chevron, he briefly held an additional title, that of Mayor of Sparta. He quickly discovered that even though he wanted the best for his town, he was not a politician at heart. Eventually Jack left the service station business, and started working for the City of Sparta, where he managed the Street Department. In 1986, Jack and Joann sold their home in Sparta and started a new chapter of their lives by moving to Lake Sinclair with Joann’s mother, Juanita Johnson. Jack continued working for the City of Sparta until he retired in 2000. He was proceeded in death by his parents Olin and Bessie Collins of Sarasota, and siblings Elizabeth, Leola, Claudia, Nannie, Alonzo and Fred. Survivors include his wife of almost 69 years, Joann Johnson Collins of Eatonton, daughters Lisa Collins of Eatonton and Cindy Collins England of Madison GA, and his beloved granddaughter, Faith Collins Hyman of Atlanta. Friends who wish to send condolences in the form of a gift may contribute a donation to John Hancock Academy or Pierce Memorial United Methodist Church in Jack’s name.

Jack Collins, age 94, passed away Tuesday, July 17, 2019 at his home on Lake Sinclair. Services will be held at Pierce Memorial United Methodist Church on July 27, 2019 at 3 pm. Visitation will be at 2 pm in the Church Annex and there will... View Obituary & Service Information

The family of Jack Collins created this Life Tributes page to make it easy to share your memories.