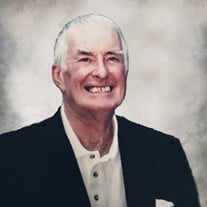 Jimmy Jackson Wray peacefully passed away on Sunday, August 16, 2020, in Macon, Georgia. Jack was born July 12, 1936 in Austell, Georgia, to James Mell Wray and Sarah Jackson Wray. Jack’s family moved to Milledgeville, Georgia when he was a young child and he remained there most of his life. Jack graduated from Georgia Military College High School in 1954 and graduated from Emory University with a BBA in 1958. Jack met Virginia Aletta Watts in Milledgeville, while she was attending college; they married and had five children. Jack was the older of two children. He is predeceased by his parents, his brother Robert Mell Wray and his son Richard Lyon “Chard” Wray. He is survived by his children Jackson Mell Wray, Lisa Wray Anderson (Richard), Sarah Virginia Wray, Hammond Keith Wray and his four grandsons, John Wesley “Jack” Anderson, Richard Davenport Wray, Robert Colin Mell Wray and James Jeptha Wray, all of St. Simons Island, Georgia and his longtime partner, Pamela N. Candler of Macon, Georgia. He was involved in a number of entrepreneurial endeavors over the course of his working life. He was a member of Phi Delta Theta Fraternity, Milledgeville Jaycees, Rotary Club of Milledgeville, active in the Milledgeville Chamber of Commerce, and served on the Milledgeville City Council. In his younger years he was an avid amateur golfer and a member of Milledgeville Country Club. He was a member of St. Stephen’s Episcopal Church in Milledgeville, serving on the vestry, Sunday school superintendent, and Sunday school teacher. More recently Jack was a member of St. Paul’s Episcopal Church in Macon, Georgia. There will be a private graveside service. The family suggests that remembrances be made to the Chard Wray Food Pantry, 472 Broad Street, Milledgeville, Georgia 31061 or Haitian Hope, PO Box 7326, Macon, Georgia 31209. Arrangements have been entrusted to Williams Funeral Home in Milledgeville, Georgia.

The family of Jack Wray created this Life Tributes page to make it easy to share your memories.