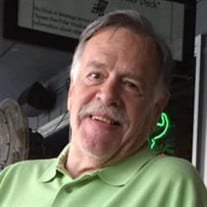 James Maxwell “Jim” Bentley, III, age 73, of Milledgeville, passed away Monday, February 10, 2020. A Celebration of Life for Jim Bentley will be conducted Saturday, February 15, 2020 at 11:00AM in the Chapel of Williams Funeral Home with Rev. Bill Bozeman officiating. The family will receive friends immediately following the service. A native of Macon, Jim was born October 30, 1946 to the late James Maxwell Bentley, Jr. and the late Wilma Nell “Top” Bentley. In addition to his parents, he was also preceded in death by a brother, Andrew Bentley. He attended Tallulah Falls School and Andrew College. Jim, and family, moved to Milledgeville in 1980, and retired as an Agent with Nationwide Insurance. He was a member of Hopewell United Methodist Church. Jim is survived by: his wife, Donna Millirons Bentley of Milledgeville ; 2 Sons, Jay Matthew Bentley of Milledgeville and John Andrew “Drew” Bentley of Milledgeville ; a sister, Betty Lynn Bentley (& Jerry) DeLoach of Springfield ; 4 Grandchildren, Hayden Maxwell, Hannah Grace, Madeline Faith, and Camden Jayce ; and a brother-in-law, Phillip Dent of Macon. In lieu of flowers, the family has asked that Memorial Contributions be made to the Alzheimers Association, 225 N. Michigan Ave., Fl. 17, Chicago, IL 60601. Condolences may be expressed online at: www.williamsfuneral.net Williams Funeral Home and Crematory of Milledgeville is in charge of arrangements.

The family of James Maxwell "Jim" Bentley, III created this Life Tributes page to make it easy to share your memories.