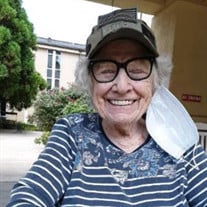 Mable “Jane” Brooks Silva, age 100, of Milledgeville, passed away Friday, January 29, 2021. The family will receive friends at the Williams Funeral Home of Milledgeville on Sunday, January 31, 2021 from 4:00pm until 6:00pm. A native of Baldwin County, Jane was born February 8, 1920 to the late Horace Erskin Brooks, Sr. and the late Georgia Miller Brooks. Along with her parents, she was also preceded in death by her husband, Manuel Melvin Silva, and by her brother, Horace Brooks, Jane was the last of 10 siblings to die. Jane lived most of her adult life in Jacksonville, Florida, before moving back to Baldwin County in the 1980’s. She was a retired Beautician and a member of Sacred Heart Catholic Church. Janes was also a veteran, having served in the U.S. Army in WWII. Jane is survived by: a niece, Glenda (& Glenn) Kohlhagen ; by a nephew, Ronnie Brooks ; by a sister-in-law, Geneva Brooks ; and numerous other nieces, nephews, and other relatives. In lieu of flowers, the family has asked that Memorial Contributions be made to Sacred Heart Catholic Church, 110 North Jefferson Street, Milledgeville, GA 31061 or to the American legion chapter 6 Milledgeville GA Condolences may be expressed online at: www.williamsfuneral.net Williams Funeral Home and Crematory of Milledgeville is in charge of arrangements.

The family of Jane Brooks Silva created this Life Tributes page to make it easy to share your memories.