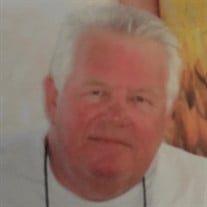 James Edward “Jim” Peugh, age 78, of Milledgeville passed away Thursday, February 21, 2019. He was born on June 16, 1940 to the late Mr. Emmett Peugh and the late Mrs. Edna Pulley Peugh. In addition to his parents, he was also preceded in death by an infant daughter, Kristie Dyan Peugh. Jim grew up in Milledgeville, and attended Georgia Military College. He then went on to graduate from Mercer Law School Magna Cum Laude. After graduation, he eventually moved back to Milledgeville, and went on to open his own law practice in downtown Milledgeville, where he practiced law for over 40 years. Jim loved to travel, and spent most of his life thinking of new adventures to go on with his family. He travelled extensively throughout Europe, along with many adventures in South America and Asia. He especially loved spending time in the Caribbean, as he had a love for deep sea fishing and all things water related. However, his real love was the Georgia coast and Sapelo Sound. While practicing law, he went into real estate as well. He was successful in all facets of his professional life, and continued to be until the end. Jim is survived by his five children and six grandchildren: Valerie Peugh of Blue Ridge, GA, and her two children, Peyton and Parker ; Tillie Anne Peugh of Greensboro, GA ; James E. Peugh, Jr., (his wife, Denise) of Union Point, and their two children, Pete and J.B. ; Jamey Peugh Rivers, (her husband, Michael) of Milledgeville, and their two children, Mason and Sutton ; and Blake Peugh of Hong Kong. Funeral Services for Jim Peugh will be conducted Tuesday, February 26, 2019 at 11:00 AM in the Chapel of Williams Funeral Home of Milledgeville. Interment will be private. Condolences may be expressed online at: www.williamsfuneral.net Williams Funeral Home and Crematory of Milledgeville is in charge of arrangements.

The family of Jim Peugh created this Life Tributes page to make it easy to share your memories.