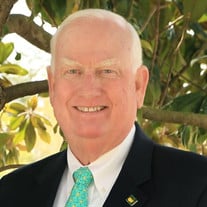 Funeral services for John Collins will be conducted Wednesday, November 20, 2019 at 11 A.M. in the First United Methodist Church. A private Graveside Service will be held later in the day. The family will receive friends at the church from 10 A.M. until the service hour. Bernard “John” Collins, Jr, 68, of Milledgeville, GA entered the gates of Heaven on November 16, 2019. John died peacefully at home surrounded by his family after a long and tough fight with Merkel cell carcinoma cancer. John was born in Sacramento, CA on September 28, 1951 to the late Catherine Londergan and Bernard Collins. Growing up as the son of an air force officer, John and his beloved sister, Sharyn Collins Holmes, traveled and lived all over the world which molded him into a man who never met a stranger. He loved people and adventure and shared that love with all who knew him. After attending college at Kennesaw State and the Graduate School of Banking of the South LSU, John married his sweetheart, Kay Brannen. The newlyweds began their life together in Atlanta, GA. Together the couple had two daughters, Courtney Collins Cawley and Kyle Collins Hitchcock. Anyone who knew The Collins Family knew how important family was and they also knew that their doors were always wide open and welcome to all. The family made several moves throughout South Carolina and Georgia and finally settled in Milledgeville in 1985. John exhibited an amazing work ethic and spent 21 years in personal banking. A career change in 1993 led him down a new path where he worked diligently to sell AFLAC supplemental insurance. He believed in what he did and would tell anyone, after losing his parents to cancer, that all you had to was share the product and it would sell itself. In the last year of his life, John decided to get licensed to sell real estate so that he could team up with his wife and help others find the perfect home for their family with Sinclair Reserve Realty. John and Kay spent years praying and serving the Lord. They were a part of a committee that focused on Christ centered counseling in Milledgeville, GA. They both realized the importance of biblical wisdom and felt the Lord call them to help bring those services to families in their local community. John has truly left his mark in our community in many areas from banking, AFLAC, Rotary, President of The Bulldog Club, the Stephen’s Ministry at First United Methodist Church, and as a gallery guard for years at the Masters golf tournament… but the truth is none of this mattered to him compared to the title “Pop.” Kay and John are affectionately known as “Lolli and Pop” and investing in their seven grandchildren was what John will truly be the most remembered for. There was hardly ever a ballgame, gymnastics meet, a piano recital, or a school program where you didn’t see Lolli and Pop there to support. John enjoyed playing golf, cheering for the UGA Bulldogs, playing on the lake, and traveling but again he got the most enjoyment from doing these things with his family. John enjoyed sharing stories from the past including witnessing history with Mickey Mantle, Masters trivia and his beloved Georgia Bulldogs to his present-day travel experiences. He will be missed tremendously and is irreplaceable in the eyes of so many. Heartbroken survivors include his wife of 45 years, Kay Collins, who he absolutely adored. His biggest concern leaving this earth was not being able to take care of her. She is also fighting cancer and their prayer was to be the miracle couple that fought together and survived together. Although, this was not the Lord’s plan, they never stopped fighting and believing that He could do the impossible. Other survivors include his children Courtney Collins Cawley married to Chris Cawley and Kyle Collins Hitchcock married to Andrew Hitchcock. His grandchildren: Chandler Davis Cawley, Abbie Kate Hitchcock, Kip Cawley, Canon Hitchcock, Emily Collins Cawley, Sterling Cawley and Caroline Hitchcock. His sister Sharyn Holmes and her husband Denny Holmes and their children Kellie and Dennis Holmes. Last but not least, their beloved dog, Molly. John’s favorite verse was Proverbs 3:5-6 that says, “Trust in the Lord with all of your heart and lean not on your own understanding; in all your ways submit to Him, and He will make your paths straight.” In lieu of flowers, please make all donations to the Milledgeville Christian Counseling Center.

Funeral services for John Collins will be conducted Wednesday, November 20, 2019 at 11 A.M. in the First United Methodist Church. A private Graveside Service will be held later in the day. The family will receive friends at the church from... View Obituary & Service Information

The family of John Collins created this Life Tributes page to make it easy to share your memories.

Funeral services for John Collins will be conducted Wednesday,...