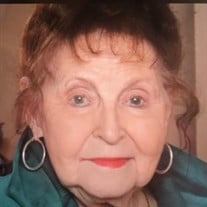 Joyce W. Poss, 85, passed away peacefully on March 30, 2019. She was born November 8, 1933 in Sparta, Georgia to Tressie and Orlando Wilson. Mr. Wilson passed away during Tressie’s pregnancy with Joyce, from injuries sustained in an automobile accident. Therefore, Joyce was never able to meet her father. In addition to her parents, Joyce was also preceded in death by her husband, Russell Candler Poss, by two Brothers, James Wilson and Lewis Wilson, and also by an infant Son. Joyce loved people, and she touched everyone she met in some way. As faithful members of Sparta Baptist Church, she and her husband Russell, who were married for 66 years and were rarely seen apart, worked tirelessly to further God’s kingdom. Joyce taught Sunday School in the Youth Department, sang in the choir, and was an active member of the WMU for many years. But Joyce did so much more than the things listed above. She lived her Christianity. She truly believed and practiced the three most important tasks commanded to us by Christ. Love thy neighbor, feed the hungry and clothe the poor. She did them with love and grace and was always far more concerned with others than she was with her own wellbeing. And as she stood before God on the day she left this earth, He surely said to her “Well done good and faithful servant”. Joyce is survived by Her Son, Russell Candler “Rusty” Poss, II of Macon ; Her Daughter, Candace Joy “Candy” Walton (& Hugh) of Sparta ; Her Sister, Minnie Poss of Sparta ; Her Grandchildren, Oscar Walton, Tami Walton Cohn (& Nathan), and Madelyn Poss ; Great Grandchildren, Haylie Walton, Hollie Walton, Grayson Cohn, and an additional Baby Cohn on the way ; as well as numerous Nieces, Nephews, and Other Relatives. Graveside Services for Mrs. Joyce Poss will be conducted Wednesday, April 3, 2019 at 11:30 AM in the Sparta City Cemetery. The family will receive friends on Wednesday, April 3, 2019 from 10:00 AM until 11:00 AM in the Sparta Baptist Church. Flowers are accepted or donations may be made to the First Baptist Church of Gray or the First Baptist Church of Sparta. Condolences may be expressed online at: www.williamsfuneral.net Williams Funeral Home and Crematory of Milledgeville is in charge of arrangements.

Joyce W. Poss, 85, passed away peacefully on March 30, 2019. She was born November 8, 1933 in Sparta, Georgia to Tressie and Orlando Wilson. Mr. Wilson passed away during Tressie&#8217;s pregnancy with Joyce, from injuries sustained in an... View Obituary & Service Information

The family of Joyce Wilson Poss created this Life Tributes page to make it easy to share your memories.