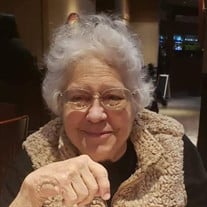 Judith Ann “Judy” Forsythe Kump, age 73, of Jonesboro, passed away Friday, November 12, 2021. Memorial services for Judith “Judy” Kump were held Sunday, November 14, 2021. Interment will be held in the Georgia Veterans Memorial Cemetery. Judith Ann Forsythe Kump was born on February 29, 1948 at Victoria Hospital in Miami, Florida to Grace Mary Najar Forsythe and William Perry Forsythe. She attended Sylvania Heights Elementary School and West Miami Junior High during which time she was active in Coral Way Methodist Church’s Methodist Youth Fellowship, singing in choir, attending youth camps, socials and outreach activities. She was also a Girl Scout. Judy was in the first graduating class - 1966 - of Miami Coral Park Senior High School where she was active singing in chorus. Their most noted production was “Lil’ Abner” under direction of Ms Joan Owen. After closing night the cast went to Farrel’s Ice Cream Shoppe in Coral Gables resulting in what might be considered a “flash mob before its time” of the “Lil’ Abner” production. After graduation, Judy attended Miami Dade Junior College and began working as a dental assistant in downtown Miami. She later graduated from Florida College of Medical Technology and became a medical assistant working in Coral Gables. In the early 70’s, working for Southern Tackle Distributors, she was introduced to her soon to be husband by her soon to be step-sister inlaw, Karen. She married Frank “Skeets” Kump on July 31, 1976 in her home of 28 years. They newlyweds moved to Georgia after their honeymoon. Judy and Skeets traveled extensively around the US for Skeets’ job, often bringing their cat, Sam. They also enjoyed salt water fishing and boating on Lake Lanier in their houseboat. Judy and Skeets were charter members of the Atlanta Saltwater Sportsman’s Club. Judy was an avid photographer as well as party planner and decorator for the club. She published newsletters, announcements and other printed materials to promote and support the club and its members. She was assisted in these computer projects by their growing number of “heat seeking” cats. Judy was a charter member of the FUGAWEE sisterhood from the fishing club. These faithful supportive ladies met as often as possible for fellowship, food and fun. They blessed her life in so many ways. Judy began working for the Clayton County Tag Agency in 1999. She retired in 2006. Facebook enabled her to keep up with family and current and past friends from all areas of her life when it became too difficult to travel. Judy and Skeets enjoyed spending time with family, neighbors, past and present friends and Fugawee sisters who all helped them in so many ways when health challenges arose. She was an encouraging wife, stepmom, “grandma”, daughter and sister, relying on her faith in God and the power of prayer. We will miss her - and Skeets - but rejoice with her being reunited with her loving parents and husband in heaven. Judy is survived by her sister and brother-in-law, Linda and Danny Posada, their sons, Brent and Timothy, and their grandchildren, her stepson and his wife, Joe and Jan Kump, and their children, Ashlyn and Tyler, her step-sister in law and her husband Karen and Chuck Latanza, and their children, Alisha and Eric. Condolences may be expressed online at: www.williamsfuneral.net Williams Funeral Home and Crematory of Milledgeville is in charge of arrangements.

The family of Judith Ann "Judy" Forsythe Kump created this Life Tributes page to make it easy to share your memories.