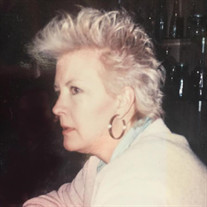 Mrs. Kathleen Florence Chumley Morgan, 76, passed away on October 13, 2021. Funeral Services for Kathleen Morgan will be held on Monday, October 18, 2021 at 7 PM in the Williams Funeral Home Chapel in Milledgeville. The family will receive friends at Williams Funeral Home on Monday from 6 to 7 PM. On October 13, 2021, Kathleen Florence Chumley Morgan better known as Kasey or Kathy passed away suddenly. She was born in Saginaw Michigan May 20, 1945 and lived to be 76 years old. They moved to Marietta Georgia when she was a little girl, and has been a lifelong Georgian ever since. In her teenage years they moved to Rome Georgia were she met the love of her life Anthony Jerome Morgan. They married and moved to Conyers Georgia with thier 2 Children Jeffery Jerome Morgan and Melissa Leeann Morgan King better known as Gidget. They also had two other infant boys, Guy Anthony Morgan and another infant son, both passed away. Kasey was well-loved in her small town, was the fun Mom who took all the neighborhood kids and a wagon and walked them to town and picked up bottles on the way and would turn them in and used the money to buy all the kids an ice cream. She was always a free spirit she worked for two Western Wear stores before she ventured out on her own and started Cowboys Westeren Mercantile, after running the bussiness for several years, she sold out to her business partner and moved to Cody Wyoming where she lived on the Hidden Valley Ranch. She ran the Ranch house and they did guided hunts and she would have the hunters bounty cooked for dinner and served like a B&B. She then decided to move back to Conyers Georgia where her children lived, and now had 4 grandchildren from her daughter Gidget and Son in Law Ronnie. Fast forward some years and she was blessed with 6 great Grand children. She then moved down to Milledgeville to care for her 95 year old father. Kasey was preceeded in death by her Parents Maxine June Chapman Chumley and James Farris Chumley,her baby brother Jeffery Farris Chumley, her husband Anthony Jerome Morgan and their two infant sons Guy Anthony Morgan and infant boy. Kasey was survived by her oldest son Jeffery Jerome Morgan and daughter Melissa Leeann Morgan King better known as Gidget, son in law Ronald Lee King and their four children, Oldest Shelly Nicole King Shipp and her husband Jonathan Mack Shipp and their children Dominic Lee Shipp, Dawson Bram Bullard and Dylan Zane Bullard, second child Leeann Marie King Singleton and her husband Riley Reeves Singleton and their children Rachel Madison Singleton, Heather Ann Singleton and Breanna Marie Singleton, third child Anthony Kyle King and his wife Hazel Marie Rushton King and fourth child, Taylor Dean King.

Mrs. Kathleen Florence Chumley Morgan, 76, passed away on October 13, 2021. Funeral Services for Kathleen Morgan will be held on Monday, October 18, 2021 at 7 PM in the Williams Funeral Home Chapel in Milledgeville. The family will receive... View Obituary & Service Information

The family of Kathy Morgan created this Life Tributes page to make it easy to share your memories.