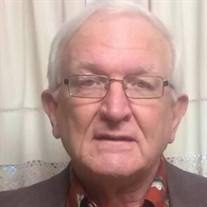 Kenneth (Ken) Waymon Jones, often called "The kindest man in the world," passed away from complications related to Alzheimer's disease, at home, surrounded by loved ones. Born Sept. 4, 1948, in Demorest, Ga., he was preceeded in death by his father and mother, Waymon and Alice Jones, his brother, Randy Jones and sister-in-law, Sherry (Sunshine) Jones. Surviving family members include his soulmate, Donna Torrance Jones, his son, Christopher Rush Jones (Whitney), two daughters, Brandie Marie Reddick (Eric), Valerie Marie Knighton (Kevin) and three grandchildren, Timothy Clark Reddick, John Hudson Reddick and Emily Faith Knighton, and his favorite nephew, Carr Chester Jones (Tara). Ken attended Habersham County Schools and graduated from The University of Georgia. In 1972, he settled in Milledgeville to open The Pet Shoppe, in the newly-built Hatcher Square Mall. During this time, Ken was also employed by the Georgia Department of Labor at its original location on North Wayne Street. Ken was best known for his employment with Rheem Manufacturing as he was hired on in the personnel department, where he assisted many people in finding employment with the company. Along with Rheem, other jobs he held in which he assisted others in employment included C.T. Harris Trucking, Georgia Boot and Spring Hill Trucking. Durning his younger years, Ken was an avid runner, becoming one of the founding members of the Milledgeville Milers Club, running with his friends Randy England, Russell and Elaine Sweatland, among many others. Running brought Ken many pleasures besides being in the great outdoors. He wrote a weekly running column in The Union-Recorder and he was proud of running 23 consecutive Peachtree Road Races. At one point he became close friends with Clark and Arlene Downer, the owners/operators of the well-known restaurant, Mr. Sirloin, which soon changed its name to The Cornbread Cafe. It was here that he met the love of his life, Donna, in 1992, marrying her in 1996, spending 28 years together. Ken loved ALL sports, but none so dear as his beloved Georgia Bulldogs. Among the many things he loved besides sports was fishing, with trout fishing (fly fishing) being on the top of his list. An avid animal lover, it mattered not if it was a small furry pup, horse or a slithering creature; he just loved nature and all that came with it. Camping, sitting around a campfire listening to the sounds of water and nature were among his favorite things, and the closest he came to hunting was with a camera. Ken's greatest attribute was his firm belief in his Creator, God and because of his deep faith he deeply cared about all people he met. Everywhere he went people would stop him to talk and he loved nothing better. It became the family joke that even when we would travel out of town, he would met people that he assisted in employment opportunities, friends from The Pet Shoppe, The Running Club, or fans of his weekly running article. Along with the great outdoors, Ken was a lover of all things Western and enjoying a good John Wayne film, an episode of "Gunsmoke" or "The Virginian" were often great ways to pass time. The world and his family have lost the kindest, gentlest human we have ever known and our world will never be the same. Only the knowledge, the firm belief that, yes, we will see him again one day eases the raw, deep pain felt by those who knew and loved him. His wife always referred to Ken as "her gift from God" and she was heard to tell him that God had given him to her and if he, God, needed him back then she sadly would let him go, knowing she would see him again. Till we met again, 4Eber. Hutchenson Funeral Home, 71 Park Heights Dr., Buchanan, Ga. is in charge of arrangements, 770-646-3878. Visitation will be from 10 a.m. to 10:30 a.m. The funeral service will be from 10:35 a.m. to 11 a.m. The service will be lived streamed. The family will post the service on Hutchenson Funeral Homes Facebook pages. In lieu of flowers, please give to the Animal Rescue organization of your choice.

Kenneth (Ken) Waymon Jones, often called "The kindest man in the world," passed away from complications related to Alzheimer's disease, at home, surrounded by loved ones. Born Sept. 4, 1948, in Demorest, Ga., he was preceeded in death by his... View Obituary & Service Information

The family of Ken Jones created this Life Tributes page to make it easy to share your memories.