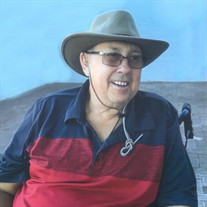 Lamar Wilson Guy, age 74, of Milledgeville, passed away Friday, September 25, 2020. Funeral Services for Lamar Guy will be conducted Monday, September 28, 2020 at 2:00pm in the Chapel of Williams Funeral Home and Crematory of Milledgeville. Interment will follow in Heritage Memorial Park. The family will receive friends at the Williams Funeral Home on Monday, September 28, 2020 from 1:00pm until the service hour. Born on July 2, 1946 to the late Alvin Wilson Guy and the late Izona Beasley Guy, Lamar was born in Washington, GA, and grew up in Warrenton. He was a Graduate of Warren County High School, and went on to receive his Vocational/Technical Degree in HVAC. He was a Mason and member of Benevolent Lodge #3 F.&A.M., and was a 32nd degree Scottish Rite Shriner and member of the Al Sihah Shrine in Macon. Lamar was a member of Hardwick Baptist Church and the Local #472 Plumbers and Steamfitters Union. Lamar was also a Welder, and was affectionately known as a “Master Manipulator of Molten Metal”. He was a prankster at heart, and constantly looking for someone to “get one over on”. According to those who knew him best, he could fix “anything from a broken heart to the crack of dawn”. Along with an extremely ferocious work ethic, he was fiercely competitive in everything he did. He was an avid sports fan, enjoying hunting, golf, football, baseball, bowling, tennis, cards, ping pong, and cornhole. He loved sports so much, that on Friday nights, he was liable to show up at any various high school sporting event, even if he didn’t know anyone participating. It’s been said that Lamar loved to go “No Low” in Spades, even when holding a hand full of Aces and Kings, and that he enjoyed “working on anything that won’t work, from AC’s to Washing Machnes.” Lamar is survived by his wife, Sallie Shurley Guy of Milledgeville ; his daughters, Christy Lewis of Gray and Gaynie Gee “GeGee” (& Mike) Arnold of Milledgeville ; his grandsons, Colby A. “Rambo” Lewis of Gray and Milton G. Arnold of Milledgeville ; his sister, Gail G. (& W.F.) Norris of Warrenton ; and his brother, Jerry “Goat Man” Guy of Thomson. The family has requested that those who wish, may make Memorial Contributions in Lamar’s memory to: Shriners Hospitals for Children, 2900 Rocky Point Drive, Tampa, FL 33607 ; or to St. Jude Children’s Research Hospitals, 262 Danny Thomas Place, Memphis, TN 38105 ; or to the Hardwick Baptist Church Building Maintenance Fund, 124 Thomas St, SE, Milledgeville, GA 31061. Condolences may be expressed online at: www.williamsfuneral.net Williams Funeral Home and Crematory of Milledgeville is in charge of arrangements.

The family of Lamar Wilson Guy created this Life Tributes page to make it easy to share your memories.