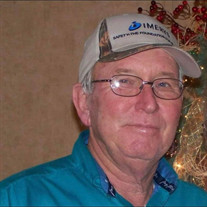 Larry Summers Hollie of Cottage Grove, TN passed away Sunday, February 6, 2022 following an extended illness at his daughter’s home with family by his side. Larry was born in Obion County, TN to the late RB Hollie and the late Imogene Sullivan Hollie of Union City, TN. He married the love of his life, Sherry King Hollie of Union City and together they reared four children. As a second generation dairy farmer and row cropper, Larry represented Dairymen, Inc. as Outstanding Young Dairymen in its Paducah, KY division at age 28. Larry moved his family from Fulton, KY to Sandersville, GA in December 1978 where he and Sherry lived for 23 years before returning to TN and settling in Cottage Grove. Larry was an active member of the Cottage Grove Church of Christ. The most important things in life for him were putting God first and spending time with his family, especially with his grandchildren and great grandchildren. Those who knew Larry knew that his passion was tending to his black angus cattle. A running joke in the family was that he loved his cows more than children. Larry is survived by his wife, Sherry of almost 55 years and children, Jeff Hollie of Oklahoma City, OK; Laura Hollie-Mock (Allen) of Sparta, GA, John Hollie of Mitchell, GA and Brian Hollie of Brighton, TN. Also surviving are grandchildren, Breanna Hill (Jason – children Emery and Deacon), Summer Hollie McReynolds (Michael), Lauren Hollie Jackson (Cody – children Addisyn and Camryn), Tristan Mock, Brennan Hollie, Kirsten Hollie, Carter Willis, Chandler Mock and sisters Dianne Thomason of Union City, TN and Jackie Rayburn (Jim) and a host of nieces and nephews. Larry is predeceased by his parents and grandaughter, Courtney Hollie. A memorial service will be held on February 26th at 1:00 PM at the Cottage Grove Church of Christ. The family requests that in lieu of flowers that contributions be made to St. Jude’s Research Hospital or to Shriner’s Hospital for Children.

Larry Summers Hollie of Cottage Grove, TN passed away Sunday, February 6, 2022 following an extended illness at his daughter&#8217;s home with family by his side. Larry was born in Obion County, TN to the late RB Hollie and the late Imogene... View Obituary & Service Information

The family of Larry Hollie created this Life Tributes page to make it easy to share your memories.