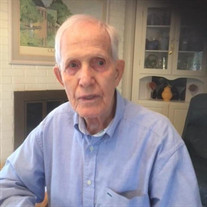 Leman I “Rudy” Rudeseal died Monday, Feb. 15, at his home in Atlanta after a long illness. He was 97 years old. A memorial service and visitation will be held Saturday, Feb. 20 from noon to 2 p.m. at Community Baptist Church with The Rev. Chip Reeves officiating. Entombment will be at the Georgia Veterans Cemetery at a later date. A second memorial service will be held at Claremont Place In Decatur, Ga, at a future date. Mr. Rudeseal was preceded in death by his wife of 47 years, Mollie R. Rudeseal; his parents, Recie and Luther Rudeseal; by his three brothers, Fred, Percival and Charles, and their wives; by his sisters-in-law Jenny and Theresa; and his nephews Elton and James and his niece, Donna. He was a life-long Baptist. Mr. Rudeseal was born in 1923 in Alto, Ga. and was a 1940 graduate of Baldwin High School in Baldwin, Ga. He served in President Franklin Roosevelt’s Civil Conservation Corps, and he moved to Plainville, Ct where he went to work at Marlin Rockwell as a lathe operator. In May, 1943 he was drafted into the U.S. Navy and served in Ottumwa, Ia.,and Crowe’s Landing, CA. He left the Navy in 1946 and returned to Connecticut, where he continued to date Mollie Redente, whom he married after his first year at Georgia Tech in 1950. He was graduated from Georgia Tech with his degree in Electrical Engineering in 1954, at the Fox Theatre. The couple moved to Rome, Ga., where he was hired by Georgia Power as a Field Engineer. Their only daughter was born in 1957. He stayed with Georgia Power his entire career, serving in Rome, Waycross and Atlanta. He retired in 1984 as supervisor of operating training. After retirement, he stayed active in the Atlanta-area Ambassadors. A close-knit family is left to remember Mr. Rudeseal and their memories with him. He is survived by his only daughter, Dr. Ginger Rudeseal Carter Miller (Dr. Randy Miller); his beloved grandson, Jeffrey Carter and his father, Blanton F. Carter, Jr. His nieces Cynthia, Pauline and Josie; His nephews Jon, Lynn, Bret, and Stan; his brother-in-law Sebastiano Radinieri of Newington, Ct. He is also survived by his partner of 23 years Mary B. Mallison, and the members of her family, and several cousins. In lieu of flowers, the family has requested donations to Georgia Cancer Support, Inc., Box 1938, Milledgeville, Georgia 31059-1938.

Leman I &#8220;Rudy&#8221; Rudeseal died Monday, Feb. 15, at his home in Atlanta after a long illness. He was 97 years old. A memorial service and visitation will be held Saturday, Feb. 20 from noon to 2 p.m. at Community Baptist Church with... View Obituary & Service Information

The family of Leman Iven Rudeseal created this Life Tributes page to make it easy to share your memories.