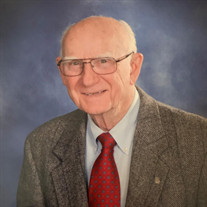 A Celebration of Life for Mr. Lionel A. “Sam” Watson, age 94, will be conducted on Saturday, July 31, 2021 at 11 A.M. in Williams Funeral Home Chapel with Rev. Mac Enfinger officiating. Mr. Watson was a native of West Virginia, married, raised his son in Atlanta, and retired with his wife, Ann, in Milledgeville. Sam and Ann loved to fish, moving to Lake Sinclair after his retirement, where they enjoyed boating and fishing for many years. After Ann passed away, Sam stayed in Milledgeville, and began a lasting friendship with Betty Hodges, also a widow, and they became each other's constant companions for many years until her death last year. They supported one another, sharing countless adventures and stories throughout their relationship. Sam was predeceased by his parents, Lionel Hope Watson and Pearl H. Linton Watson and his wife, Ann Elizabeth McLain Watson; siblings, Joyce Satterfield, Marie Umina and Frances Watson. Sam retired from the United States Air Force as a Major. He served his country as a pilot, where he flew the P-51 Mustang on patrol on the West Coast after Pearl Harbor. He was a member of the Milledgeville Rotary Club and had perfect attendance for more than 40 years and was a member of the First United Methodist Church in Milledgeville. Survivors include his son, James H. Watson and wife, Betsy, of Peachtree City; grandsons, Justin Watson of Marietta, Zachary Watson of Lithonia and Ethan Watson of Denver, CO. In lieu of flowers, the family requests donations in memory of Sam Watson to the First United Methodist Church of Milledgeville. Express online condolences at www.williamsfuneral.net Williams Funeral Home and Crematory of Milledgeville is in charge of arrangements.

The family of Lionel "Sam" Watson created this Life Tributes page to make it easy to share your memories.